Probably fair to call Los Sounds de Krauts a transitional release for Colour Haze, though one might say the same of their 13-album discography. Issued through the venerable Nasoni Records in 2002 and subsequently as the first release through guitarist/vocalist Stefan Koglek‘s then-soon-to-be-venerable Elektrohasch Schallplatten imprint, it is one of numerous 2LPs the Munich-based outfit have done since their 1995 debut, but one of only two to not be contained on a single compact disc.

Its four sides originally labeled with the cardinal directions counterclockwise in German — Westen, Süden, Osten and Norden; labeled likewise on the two CDs — the tracklisting has shifted somewhat on the reissue, putting “Otherside” earlier and “2+7” later, making the 15-minute “Overriding” the closer and “Schlaflied,” the former closer, the first song on the last side. The end result is a record that’s lost a few minutes in the process of remixing — “Weltraummantra” (16:23) was 18 minutes long, “Overriding” (15:21) was 17:37, and so on — but still runs 85 minutes long and captures the air of spontaneity at its root.

As the follow-up to 2002’s 2LP, Ewige Blumenkraft (reissue review here), Los Sounds de Krauts, with its odd, multi-lingual-seeming title and sides pointing the listener in one direction or another, was an embrace of the progressive and psychedelic in a new way for Koglek, bassist Philipp Rasthofer and drummer Manfred Merwald, stretching in form even beyond where the massive 19-minute “Elektrohasch” that concluded the last album had gone, pushing outward from their foundations in heavy rock and into more open spaces.

Throughout Los Sounds de Krauts, Colour Haze can be heard fully embracing the tonal warmth that over the next few years and offerings would become their banner, and exhibiting the patience of craft and purposeful exploration that helped their influence continue to spread throughout the aughts and then 2010s in and beyond Europe. It’s easy now to call it a transitional album. At the time, it was the deepest Colour Haze had yet dug into their own sonic persona, their most individualized collection, freeing themselves from genre concerns to a new degree and thereby working to forge a heavy psychedelia that, quite frankly, didn’t exist before them in the way it did after they made it.

Significantly, the original vocals for “Where the Skies End” were lost and are re-recorded here, with Koglek working from the original Tim Höfer recording on the new mix. As regards Los Sounds de Krauts as a whole, there’s a lot that’s said in the first 10 seconds of the record to tell the listener what they need to know. The guitar at the outset of “I Won’t Stop” shimmers, brimming with life and not-desert fuzz, joined soon by the drums and bass in a classic boogie that’s still somehow post-grunge in its presentation, and it the sense of life in the recording is the most immediate factor.

It’s right there. They’re right there. Later on, before, after songs, there are pauses or breaks before a song starts or stops. These subtle touches put the audience in the room with the band while the songs are being put to tape, whether it’s the quiet at the end of the softly-noodled “Schlaflied” or the build-up intro to “Plazmakeks” or the feedback at the and of second cut “Roses.” 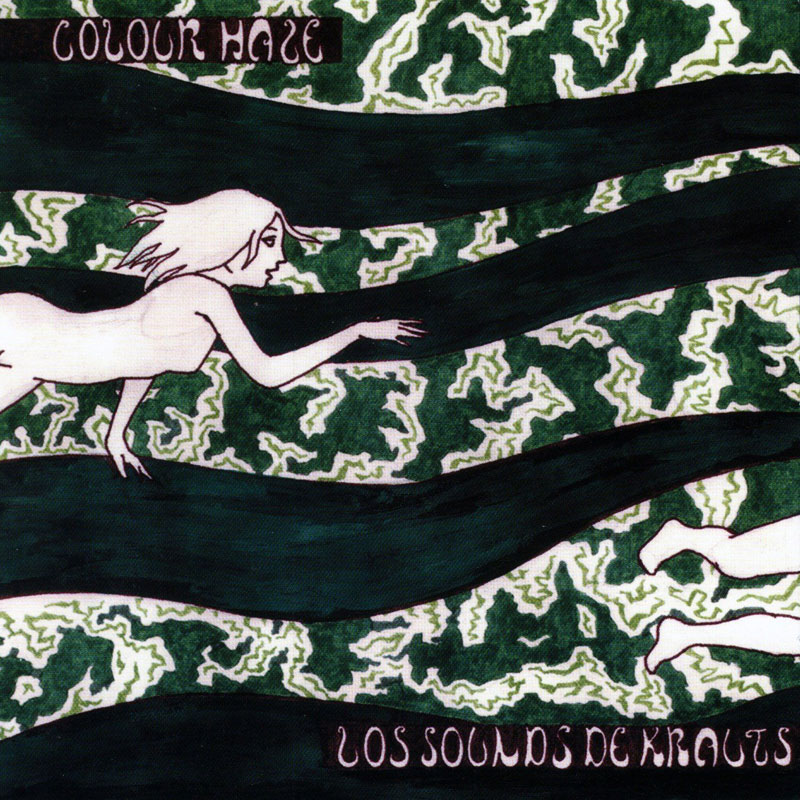 But the effect of “I Won’t Stop,” and really the rest of side A along with it in “Roses” and the winding fluidity of “Zen,” is to create a momentum that carries into the proceedings as “Plazmakeks” picks up the jammier vibe from “Zen” and pulls it further along an instrumental course. There’s still plenty of shove to be had as the two-minute freakout “Other Side” arrives well placed to speed-boogie between that 10-minute cut and the highlight “Sundazed,” which is nearly as long and so serene as to make the movement of one track into the next all the more headspinning.

Situated about as close to the halfway point as it could be, “Sundazed” is the capper of the first CD and the first LP on the new and old versions of Los Sounds de Krauts and a model they’d continue to follow in their landmark 2004 self-titled (discussed here) and beyond. Atop Merwald‘s steady snare pops and the vibrant rumble of Rasthofer‘s bass, Koglek‘s layered vocal and guitar takeoff are nothing less than essential lessons to be learned about the passion that drives rock and roll at its best. And there’s still half an album to go.

About that. I am generally of the opinion that a 2CD release is superfluous, and yeah, if Colour Haze had cut five or six minutes out of Los Sounds de Krauts, they’d have still hit a 2LP mark and probably saved some on manufacturing only one CD. Would that mean no “Roses?” Would it pull the playful bassline of “Where the Skies End” out? Or the stick-clicks-and-go last grounded moment in “2+7” before “Overriding” brings its organ-laced jammy conclusion? Would that be faded out? Any of these changes would inexorably shift the character of Los Sounds de Krauts, and among the album’s strengths, that is second to none of them.

Particularly as the reissue brings new lush cover art by Jessica Rassi and emphasizes the creative spirit so rife throughout the material, right up to that surge in “Overriding,” it’s simply worth the investment in time it asks of the listener in both its peaceful and most shoving parts.

18 years later, it’s still worth that investment, and the new mix carries that feeling of soulfulness that is no less a Colour Haze hallmark than Koglek‘s tone, or Rasthofer‘s, or Merwald‘s — because, yes, drums have tone and if you don’t think so, just listen to this album. I won’t pretend at impartiality. I’m a fan and this was the record that introduced me to the band, so sentimentality runs high in listening to it. Which feels exactly right for how one should be hearing the material, whether they’ve heard it before or not. Some records were just made to become a part of your life. Some records were made to be loved.