For a quarantine-era project, Delving isn’t necessarily all that insular. The outfit — stylized all-lowercase: delving — offers clues right on its face, from the colorful artwork depicting a fountain in Rudolph Wilde Park in Berlin, Germany, to the fact that the title Hirschbrunnen translates to “stag fountain,” to the fact that the moniker chosen is describing the exact process of what’s happening in the music. Think of the idea of “delving,” and the fact that the name of the band is lowercase. There’s something humble about it, and even in the eponymous second track, something tentative that dissipates the deeper you go into, say, the three-minute motorik psych rocker “Einstürzende Plattenbauten” or the concluding “Vast,” an 11-minute expanse that moves between willful drift and the record’s most weighted crush. So perhaps Delving is driven in part by an abiding awareness of its own craft, and fair enough for that.

For multi-instrumentalist Nick DiSalvo, who’s best known for his work as founding guitarist/vocalist and principle songwriter for Elder, that awareness is well earned, and even as far into progressive rock as his main outfit has pushed — 2020’s Omens (review here) brought them to a new level in that regard — Delving nonetheless represents a pushing back or pushing aside of expectations and a refreshing creative freedom that comes through even in the tonal clarity of the guitar and the keyboard bounce of opener “Ultramarine.”

To make the album, DiSalvo recorded with Richard Behrens (Heat, ex-Samsara Blues Experiment, FOH for Kadavar, etc.) and Emanuele Baratto (who also mastered) at Big Snuff Studio, and as DiSalvo handles the bulk of guitar, bass, drums, keys, etc., himself, Elder bandmate Mike Risberg also steps in to add guitar to Hirschbrunnen‘s three longest tracks, “The Reflecting Pool” (9:30), “Hirschbrunnen” (9:34) and the aforementioned “Vast.” These songs, with “Ultramarine” starting the record at just under eight minutes, are interspliced with comparatively shorter pieces, whether that’s “Delving” (7:01) or “Wait and See” (7:13) or “Einstürzende Plattenbauten” (3:40), adding to the feeling of movement between one cut and the next, however individual the explorations within might prove.

And the personalities within Hirschbrunnen do vary, whether it’s “Delving” adding forward rhythmic momentum to the textural foundation “Ultramarine” sets forth, or the piano and basslines of “The Reflecting Pool” tying together with the Mellotron (or Mellotron-esque guitar; one has been fooled before) and hypnotic guitar progression in the second half of “Wait and See,” the keystone surge of which serves as a fitting and purposeful-seeming centerpiece to the record as a whole. Those looking for some commonality with Elder will find it in that moment, as well as in DiSalvo‘s winding style of guitar in “Delving” itself, reminiscent of some of the breaks in his main unit’s more recent works, and here and there throughout if you really feel like digging — but to do so is to miss part of the point of the project as a whole.

While Elder have not wanted for exploration — their The Gold & Silver Sessions EP (discussed here) boasted plenty in 2019 — Delving ultimately holds more in common with 2014’s Azurite & Malachite (review here), on which DiSalvo also worked with Risberg, under the banner of Gold and Silver. Aside from the instrumentalism, the two projects share a progressive foundation, but where Delving departs from its conceptual semi-predecessor is perhaps even more in its willingness to not be “heavy” in the sense of weighted low-end distortion and crash, and to allow its parts to flesh out melodically along an organic course of their own. 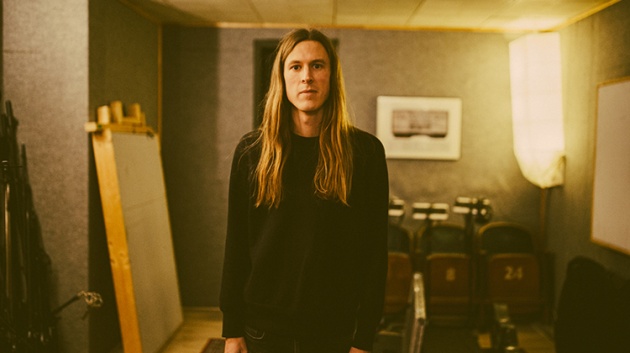 These aren’t exactly jams, though “Einstürzende Plattenbauten” has some spontaneity to its guitar and it’s not alone in that — the prevailing spirit of the release is exploration, after all, and particularly where Risberg sits in, there’s more opportunity to flesh out what’s there in the basic tracks. “The Reflecting Pool” is accordingly spacious in its finish, and the shimmer into which the title-track makes its way carries all the refreshing spirit of, yes, running through a park fountain in the middle of yet another record temperature summer. Escapism? Maybe, but at least as much about the going itself as the being gone.

As regards descriptors, it’s low-hanging fruit to call Hirschbrunnen atmospheric, though it is that. But in this case, that doesn’t necessarily mean quiet or droning or ambient so much as able to convey a sense of place, mental or physical, though following the what-if-Earthless-but-one-person kraut shove of “Einstürzende Plattenbauten,” “Vast” brings out a grand-style culmination that has its subdued stretches. In the context of the preceding six tracks, which alternate between patient and pointedly impatient in their structures, “Vast” still represents a next-stage far-outness, and though its payoff lacks nothing for heft, it’s still a departure in form.

It might be fair to point to those two final inclusions as showcasing the truest potential of Delving as a project distinct from Elder in terms of where and to what they might lead creatively, but the truth is that potential is writ large across the album as a whole and the end is just a convenient summary. If Delving is to be an ongoing project with its own development or a periodic aside for DiSalvo or, like Gold and Silver, an outlet whose progressive stylizations were eventually worked into Elder‘s songwriting, it remains to be seen. In a time so marked by upheaval of one’s normal processes, DiSalvo is hardly alone in finding a new and somewhat-different avenue of expression.

With familiar elements and individualized nuance, where Delving ends may be a mystery, but it begins here, and as an initial offering, Hirschbrunnen demonstrates not only its own potential, but how comfortable DiSalvo has become in his own skin as a songwriter and multi-instrumentalist. Even without vocals, these tracks stand on their own, not entirely separate from his work elsewhere, but neither entirely of it, inhabiting multiple spaces carved out as they go. Humility may have driven calling the “band” Delving, but the greater creative process of which this project is a part is broad and only growing more so with time.