Eons ago, when the world was bright and new and everything beautiful and nothing hurt except endless war and economic disparity — circa 2011, in other words — Black Bow Records issued a split between Conan and Slomatics (review here). The label, run by Conan‘s founding guitarist/vocalist Jon Davis, very much positioned the offering as a showcase of the drive toward sonic largesse his own band adapted in some measure from the Belfast-based Slomatics, and no doubt it was a first encounter for many listeners with the bass-less-but-still-unbelievably-heavy-and-sci-fi-prone Northern Irish trio.

What fascinates about this new split between Slomatics and Ungraven — also on Davis‘ Black Bow Records, with mastering by James Plotkin and cover art by Ryan Lesser — is that it’s Slomatics who are the “bigger” band. The three-piece of  drummer/vocalist/synthesist Marty Harvey and guitarists David Marjury and Chris Couzens went on a tear throughout the rest of the 2010s, offering four full-lengths in 2012’s A Hocht (discussed here), 2014’s Estron (review here), 2016’s Future Echo Returns (review here), and 2019’s Canyons (review here), as well as a handful of splits, adding to a foundation of earlier work much of which has seen reissue through Black Bow. Ungraven, meanwhile, began as a solo-project from Davis in 2018 and released its first studio recording in 2019’s Language of Longing, basking in a industrial-informed ’90s noise metal crunch à la Nailbomb, etc. from Earache Records around 1995 and what nobody wants to admit was the peak era of Sepultura.

Following some more demos and a March 2020 live-studio release that features all three of the tracks included here, Ungraven — now Davis alongside bassist Dave Ryley of Fudge Tunnel and Tuskar drummer Tyler Hodges — come to their own split with Slomatics not just as the newer band (because in fact Slomatics weren’t newer when they did the split with Conan), but as the group being presented in a more introductory fashion. As I understand it, this is their first recording as a full trio. So say a friendly hi to Ungraven. They’ve come to pummel your skull. Neat!

And some of the aspects with which they choose to do so will ring familiar. Davis‘ tone and shout are signature and largely inimitable, and with production by his Conan bandmate Chris Fielding at Foel Studio, there’s no doubt a certain level of comfort even as Ungraven embark on clearing their own creative path. Which is precisely what they’re doing in “Defeat the Object,” “Onwards She Rides to Certain Death” and “Blackened Gates of Eternity,” and for all the in-context elements they might share with Conan via Davis‘ basic approach, Ungraven leave behind much of the doomier, slow-lumbering plod that’s such a staple in Conan‘s work. Comparisons between the two may be inevitable, at least at this point, but there’s grounds for contrast as well and it comes from the structure of the riffs, the central charge around them rhythmically, and the fact that “Onwards She Rides to Certain Death” barely tops three minutes and gets its job done. 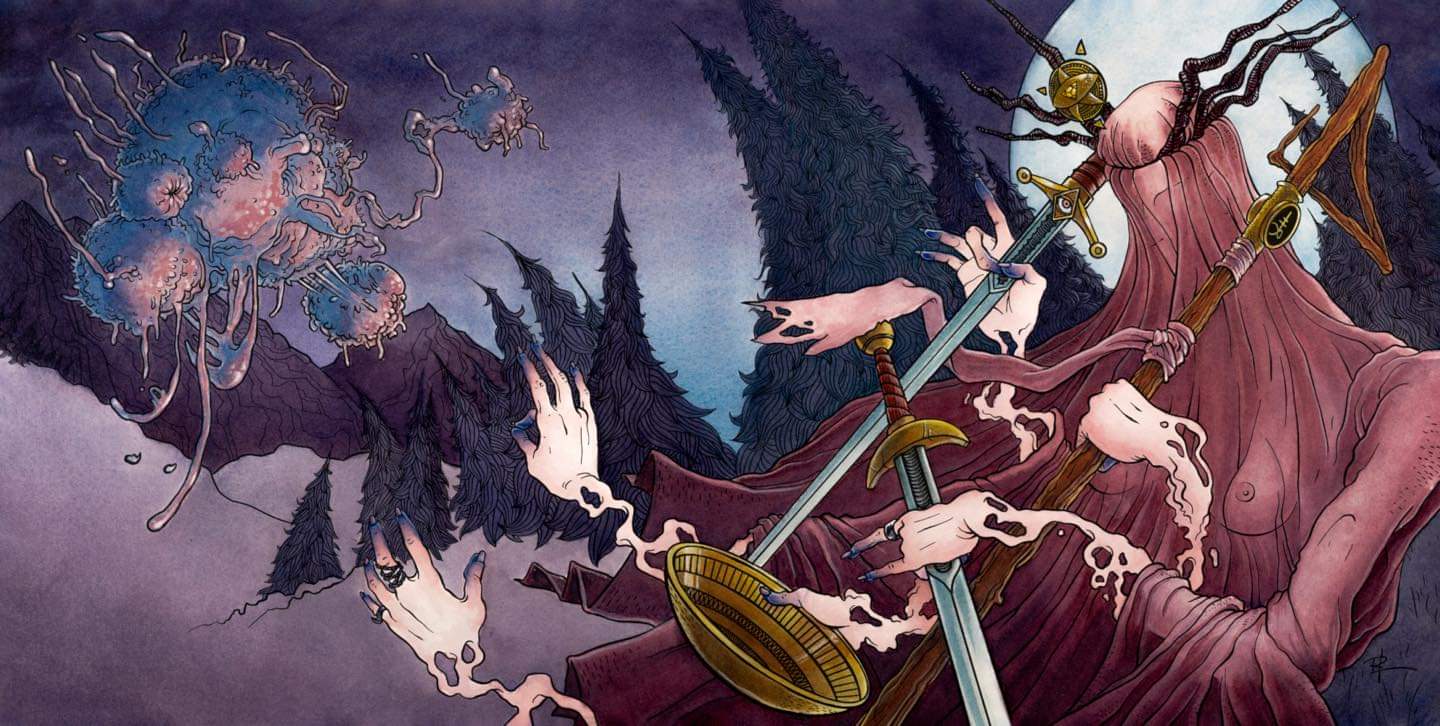 It’s a question of balance, then, as well of course as the personalities and styles of the other players involved. Ungraven are rawer than Conan at this stage, and the noisy aspect of their sound comes through despite the thickness of the low end through which it cuts, but the work here isn’t so far removed from Conan‘s earlier fare that longtime fans will be totally alienated or anything like that, particularly through “Defeat the Object,” while the run of “Onwards She Rides to Certain Death” and the tense crush of “Blackened Gates of Eternity” — which doesn’t so much release at the end as simply arrive at an even more excruciating place — push further into individualized expression. Perhaps, for all the bombast, leading with “Defeat the Object” is Davis‘ way of easing listeners into the brutal modus of the new band.

Working at Start Together Studio with Rocky O’Reilly, Slomatics‘ three tracks, “Kaan,” “Proto Hag” and “Monitors” each bring something of their own to the proceedings. With “Kaan,” it’s sheer lumber. There’s a volume dip at least on the digital version of the release between Ungraven and Slomatics‘ sides — I can’t speak to the actual vinyl — but if the answer is “turn it up,” that was probably going to be the answer anyway. “Kaan” superplods through the molassesy bulk of its 5:43 run, with atmospheric vocals layered in a kind of line-for-line call and response until, at last, Couzens, Marjury and Harvey cap with thudding toms and transitional samples into the shorter and catchier “Proto Hag,” which doubles as a trad-doom-soaring showcase for its vocals even as it remains duly thick in its roll, synth adding melody in its final chorus. Harvey is audibly pushing his voice in the last lines, and it adds to the intensity of that apex.

The concluding “Monitors” might be the highlight of the entire release, with a melancholy tempo and open feeling strum in the guitars that serves as bed for likewise downtrodden verse lines. It begins and ends with drones, and departs in its midsection for some atmospherics as well, but the effectiveness of the track overall comes from how draws together and exemplifies Slomatics‘ take on the whole. The two bands inarguably have some factors in common, but they’re telling different stories here, and while impulse with splits is always to compare one to the other — fair enough — the manner in which Ungraven and Slomatics arrive in succession is more complementary than contrasted.

An intervening decade and Ungraven and Conan being different bands precludes this split from being a direct sequel to the 2011 Black Bow offering, but there are spiritual elements shared between that release and this one, the stated friendship between Davis and Slomatics, the latter band’s continued output through the label, and so on. Sonically, there was little danger the pairing wasn’t going to make sense, and it does make sense, showing Slomatics in a place of refining their central methodology even as Ungraven seek out to claim theirs, both of which just happen to be heavy as all hell. It’s kind of a no-brainer.