Earlier this month, Cannibal Corpse released their critically acclaimed album, Violence Unimagined, via Metal Blade Records. For their efforts, the band landed on the worldwide charts, achieving some of the highest positions of their career:

Comprised of eleven tracks, Violence Unimagined is state of the art death metal played with passion and breathless precision, making for another flawless addition to what is inarguably one of the premier catalogues of the genre. Read on for what press worldwide had to say about this soon-to-be Cannibal Corpse classic:

“Cannibal Corpse doesn’t simply continue to prove its relevance with ‘Violence Unimagined‘, they’ve offered an album that’s as good as anything death metal fans could hope for in 2021. They sound as savage as a new band that’s trying to make its mark.” – Blabbermouth.net

“…the Floridians’ fifteenth studio album serves as a periodic reminder that, no matter how many pig-squealing, crypt-plundering, meat-sculpting scavengers follow in their entrail-strewn wake, nobody will ever topple them from atop their flesh-embroidered throne.” – MetalSucks.net

“…Cannibal Corpse are tearing through your eardrums with their trademark heavy as fuck death metal sound.” – MetalInjection.net

“After three decades and change, Cannibal Corpse have become the Motörhead of death metal – naturally reliable, ever in the zone, still louder and heavier than any of the bands who followed them.” – Kerrang.com

“…the death metal heavyweights produced the finest work of their murderous careers.” – v13.net

“…the death metal kings’ fifteenth full-length is one of their best…nestling up to classics like ‘Kill‘ and ‘The Bleeding’ upon first listen.” – BraveWords.com

“Violence Unimagined is another fine example of why they have been held in such high regard since they first disgusted their way into heavy metal with stories filled with enough horror to frighten Big Red himself. Every track is a killer in its own right.” – LoudMag.com.au

“Cannibal Corpse get better from album to album. Only a few bands succeed in staying true to their own style on the one hand, while at the same time, keeping it fresh.” – RockHard.de 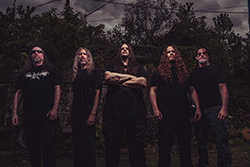