Devin Townsend will release Order Of Magnitude – Empath Live Volume 1 on October 23, a document of his Winter 2019 European tour that saw him taking on possibly his most ambitious live show to date.

Watch a new clip of the band performing the track “Why?”, taken from his latest album Empath, below.

Devin comments: “So once upon a time, in a land not much different than the one we’re living in now, there used to be things called ‘concerts’ where a bunch of human beings would assemble to watch awkward performances and get shitfaced on overpriced beer. Tour managers would solve problems while simultaneously hitting on women, and musicians would complain about not being home (until getting home, where they would then complain about not being on tour). During one of these ‘tours’, I myself assembled 10 brilliant people, confident enough to play challenging material, while simultaneously acting like goofs with me onstage. This is from the upcoming Order Of Magnitude DVD, and the song is called ‘Why?’. Kudos to Diego for being able to pull off a full symphony with only 4 limbs, and the rest of the band for not batting an eye when I presented the ideas I had for this show. Che, Samantha, Anne and Arabella came to me and said ‘look, if we have to wear this stuff, you have to as well…’ so my Tutu was a show of solidarity with band members, but as the saying goes ‘I’ve seen better legs hanging out of a nest’. I look forward to a time where we get to do this again, but if that’s not meant to be, I loved this, so thanks to everyone involved.”

The Blu-Ray edition of this forthcoming release features a behind the scenes feature, taking a look at the preparation for this tour and the filming of the live album. Watch a teaser below:

Recorded in December 2019 in London, UK on the penultimate night of the tour in support of his latest album Empath, this run of shows saw Devin joined by an incredible lineup of musicians. The band was made up of guitarists Mike Kenneally (ex-Frank Zappa) and Markus Reuter (Stick Men, The Crimson Project), drummer Morgen Agren (Kaipa, Mats & Morgan, Frank Zappa), bassist Nathan Navarro, Haken keyboard player Diego Tejeida, and guitarist/vocalist Ché Aimee Dorval, as well as vocalists Samantha & Anne Preis and Arabella Packford.

Devin’s plan for the Empath touring cycle was to divide it up into three ‘Volumes’, and this was Volume 1. The idea behind the shows was a simple one: none of the backing tapes or click tracks that had long been necessary to bring the kaleidoscopic cacophony in his head and on his records to life in the flesh. This would just be Devin Townsend and a band of genius-level musicians getting up there and trying to keep it from spinning off into outer space. Or maybe just letting it spin-off into outer space for the sheer hell of it.

“The whole objective was that I wanted to make that statement: This is by the seat our pants,” he says. “Because it’s important to me to represent this hyper anal-retentive music that I’ve made over the years, but in a human way. Rather than it just being, ‘Well, here it is, perfectly done.’”

“I was overwhelmed by the fact that all these brilliant people that I have so much respect for were willing to come together and play this weird shit with me,” says Devin. “I had these unique players and this interesting instrumentation that allowed us to interpret the music in different ways. It was clear to me that I could just have fun and be me and know that they would be effortlessly be able to follow that.”

That sense of fun and freedom was evident to anyone who was there on the night. Visually, it was an assault on the senses in the best possible way. A digital screen projected vivid images throughout the show. A giant gleaming mirrorball hung from the ceiling. There were multiple costume changes and a tiki bar onstage (a tiki bar!). 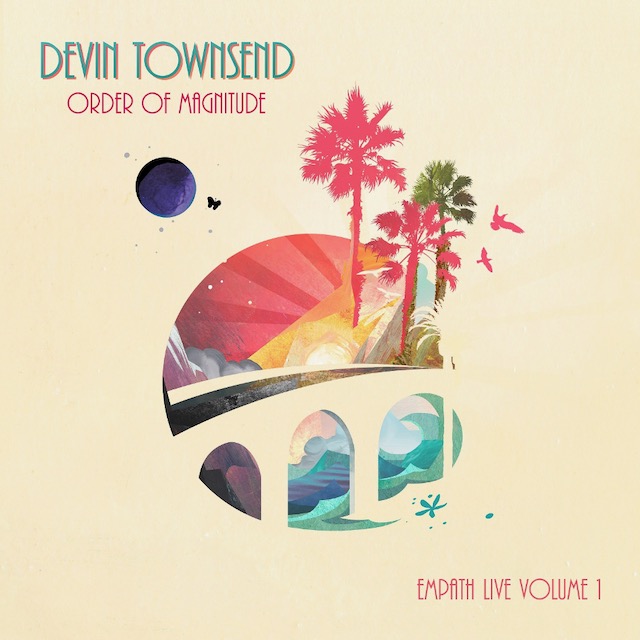