Five MORE Current Deathrock Bands You Should Definitely Be Listening To

It’s hard to believe that it’s been just over a year that we first ran our “Five Current Deathrock Bands You Should Definitely Be Listening To” feature. That piece was published in June of 2020. It’s about time for an update.

Last year’s list included some bands that may not have thought of themselves as deathrock, or who have moved away from playing that style since then, and/or perhaps don’t neatly fit the genre tag in any case. (Last year’s list included Vueltas, New Skeletal Faces, Rosegarden Funeral Party, Detoxi, and Mystic Priestess.) This year’s list isn’t so different in that regard:  That is, “deathrock” is a contentious label for many, and, just as Andrew Eldritch doesn’t consider the Sisters of Mercy to be a gothic rock band, even though they really are, many bands that sound deathrock-ish would never describe themselves as deathrock, either—even if you’d be hard-pressed to describe said band any other way. But let’s set aside the debate over labels and say that it’s perhaps best to speak of the following five bands as bands that fans of deathrock ought to be listening to.

Our five bands this time around are: Vision of the Void, Nehann, Desenterradas, Altar de Fey, and Peers on Pyres.

1) ALTAR DE FEY. It’s probably appropriate to start this list off with a band that’s been around, off and on, for several decades. A true California deathrock staple, the Bay Area’s Altar de Fey have serious roots in the oft-neglected North California deathrock scene of the 1980s. The band features members, past and current, of acts like Phantom Limbs, Chrome, and Black Ice. “[O]ur San Francisco contemporaries at the time [1984/1985],” Altar de Fey drummer Aleph Kali once told me regarding the band’s founding (after the release of the band’s 2016 Echoes in Corridor LP), “were groups like Our Lady of Pain, Fade to Black, Thrill of the Pull, Wages of Sin, Beast, Nothing Sacred, and eventually even Specimen and Rozz Williams relocated here.” Altar de Fey’s 2020 “And May Love Conquer All” EP is worthy of those classic comparisons, as well; just check out this stomper of a track from their latest EP:

2) NEHANN. Japan’s Nehann have recently released what may very well be one of the best gothic rock LPs of 2021: “New Metropolis” on Japan’s KiliKiliVilla Records. The New Metropolis LP came out in May, 2021, and unfortunately, the logo of Nehann makes it look like their LP came right out of a bargain bin of CDs from the 1990s (and, ironically, the word “Nehann” apparently translates to “Nirvana”. . .). But—let’s get to the substance of this band instead of the superficial: A lot of Nehann’s output sounds remarkably like classic-era Bauhaus, including the track below, “Nylon,” which is the lead-off track on their new LP. Japan of course has its own formidable deathrock and dark postpunk tradition (called “positive punk” there, similar to the Brits in the early 1980s), from Genet’s Auto-Mod to Phaidia to newer-ish bands like 13th Moon. Nehann’s vocalist is a dead-ringer for Peter Murphy when it comes to timbre of voice and overall singing style, and a lot of Nehann’s tracks sound as if they were lifted from unreleased Bauhaus recordings, and I mean that in a good way.

You can check out Nehann’s 2021 “New Metropolis” LP here.

3) DESENTERRADAS. Spain’s Desenterradas are one of my favorite bands as of late: They remind a lot of classic Spanish acts like Las VulpeSS and Paralasis Permanente; or bands like Burning Kitchen, with maybe a tad of newer-ish (comparatively) bands like Naughty Zombies, and American bands like Vueltas or Arctic Flowers. The band’s Danzando En El Caos LP came out only a few weeks ago (September, 2021) on the always-amazing Symphony of Destruction label from France. On their new album, Desenterradas tap back into the power of dark punk and classic, anarcho-tinged goth-punk like Rubella Ballet or Lost Cherrees. Would Desenterradas themselves agree with a “deathrock” designation? Maybe, maybe not—but they’re a lot like groups like the aforementioned Arctic Flowers or Rule of Thirds in that they’re really more of a hybrid of postpunk, deathrock, and the classic early 80s tradition of Spanish punk and UK anarcho-punk. Their new Danzando En El Caos LP is highly recommended. You can listen to the new Desenterradas’ LP here. 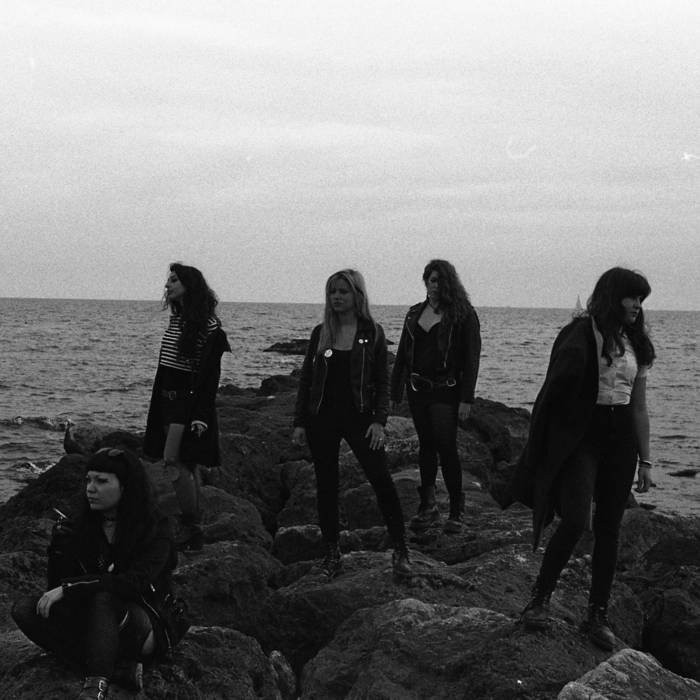 4) VISION OF THE VOID. I have to admit, I don’t know much about Vision of the Void—except that their music is really, really good. They’re from Anaheim, California according to their Bandcamp page; and that makes them perfect for a post like this that’s focused on deathrock (given the genre’s Southern California roots affiliations, that is). Think early 80s Superheroines when it comes to the sheer impact of VotV’s purist deathrock brand of music.

I’m really eager to hear more from this band, to see if they will tour, and the like. Vision of the Void’s “Promise of Escape” EP came out a few weeks ago. You can listen to it all here. 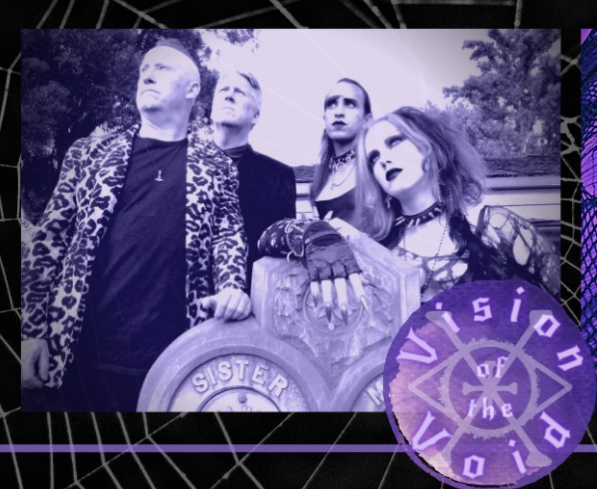 5) PEERS ON PYRES. I have to thank my friend Gary Evans for introducing me to this band. From Liverpool, UK, Peers on Pyres’ slogan is “Music for Pleasure (mine, not yours).” This outstanding band, like Desenterradas, above, may not even consider themselves “deathrock,” but that’s fine; unlike, say, the term “post punk,” the “deathrock” genre tag can still be shockingly contentious. Regardless, Peers on Pyres’ self-titled LP is comprised of many songs that fit the bill; and if you don’t like to think of them as deathrock, perhaps the band could be called a callback to the early 80s UK positive punk of bands like the Virgin Prunes. This British band’s highly recommended LP came out in April of this year (2021), and one of my favorite things about their Bandcamp page is their self-deprecating sense of humor: “Is it [our LP] any good? Not really. There are maybe only two songs worth of decent ideas across the 8 tracks here.” I disagree (but—hah). 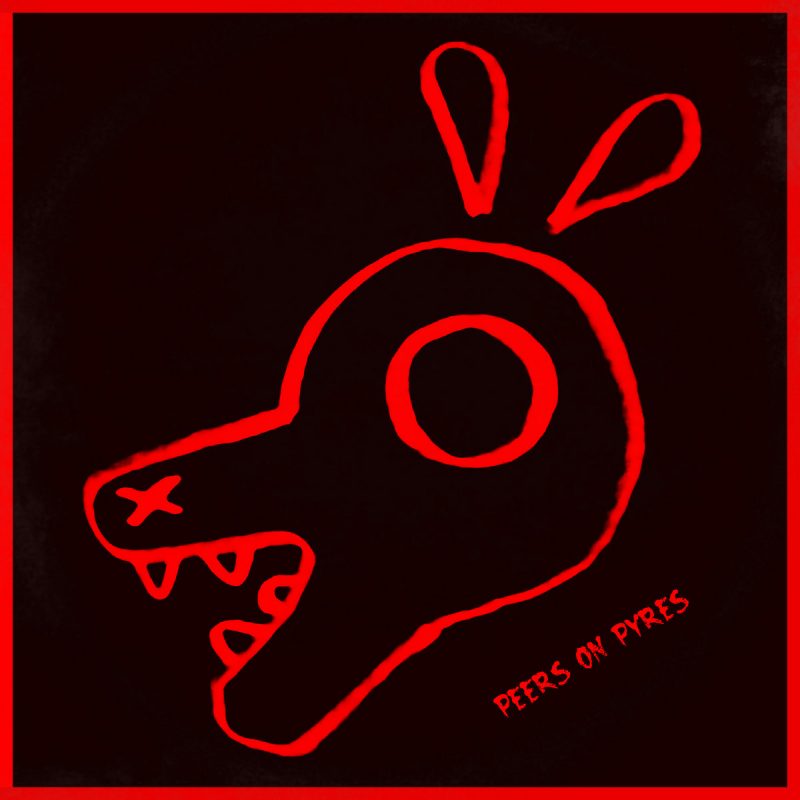 Who are your favorite current deathrock bands?

Thanks are owed to Gary Evans and Jack Control for contributing band suggestions.