German metal legends Helloween have checked in with some disappointing but understandable news:

“Sadly, but in the best interest of everyone’s health and safety, we have to postpone our European tour again. As we all know, touring is currently not possible. In order to guarantee a proper execution of the tour, we decided to postpone until spring 2022.

We are working on the rescheduled dates and will announce them shortly. In addition, we’re close to announce big news, so stay tuned! Please hold on to your tickets as they stay valid for the rescheduled show dates.

Stay safe, healthy and metal, everyone!” 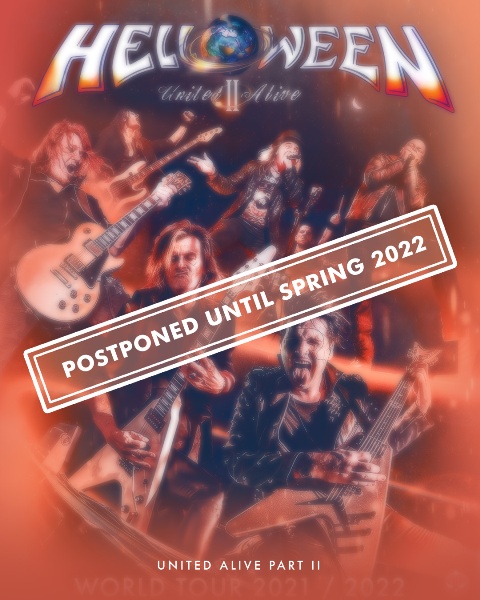 Helloween are back with the spectacular single, “Skyfall”, to be released on April 2. “Skyfall” will be available on CD, digitally and in two different vinyl versions. Pre-order here, and watch a teaser for the upcoming music video below.

The epic 12-minute track “Skyfall”, written by Kai Hansen, has the long yearned Keeper Of The Seven Keys vibe,  but isn’t musically telling the whole story of the album – this has a musical arch spanning every era: from unforgettable times to glorious newer adventures all the way to the upcoming first album of Halloween’s new age. “Skyfall” tells about an alien landing on earth and a dramatic chase, while Kai Hansen, Michael Kiske and Andi Deris duel with each other in a breathtaking manner and create a broadband adventure – including a lyric sheet with colored blocks identifying the singers, as well as a video that is formidable. Produced by Martin Häusler, it will be the most elaborate clip in the history of the band, the story to be shown with 3-D animation and having a cinematic look – in these times almost a dinosaur in implementation!

Both are exclusive single versions and will not be on the album. Around 20 minutes playing time.

This is a strictly limited version of the new single with one exclusive album track.