Portland, Oregon’s Hippie Death Cult will release their second album, Circle of Days, May 21 through Heavy Psych Sounds. Comprised of five songs, it runs a tidy 37 minutes and uses its time to unfold a melting pot of an aesthetic, bringing together ideas born of classic heavy rock and roll, psychedelia, cult rock and outlying elements like post-rock drift (in the bass of the title-track, of all places) and organic-ized Ministry-style gallop/echo vocals — quick but there — on “Hornet Party” (premiering below), and a creeping Americana paranoia in closer “Eye in the Sky.” After the four-piece’s impressive 2019 debut, 111 (review here), they push past genre lines and are more atmospheric, dynamic and, from the opening organ-style keys of “Red Meat Tricks,” able to pursue dramatic ideas and vibes without falling into a trap of sounding like a silly put-on. Guitarist Eddie Brnabic, vocalist/keyboardist Ben Jackson (also Hundred Eyes, ex-Sioux), bassist Laura Phillips and drummer Ryan Moore (ex-Nether Regions), riding solid grooves into esoteric territories varied of spirit but unified by the fullness of the underlying performance. These songs still sound like there are humans playing them, in other words.

What comes through clearest, however, is that the humans in question are pushing themselves on the level of craft. “Red Meat Tricks,” “Hornet Party” and “Walk Within” are the first half of the LP, and the latter seems to hint toward Annie Lennox‘s “Sweet Dreams (Are Made of This)” in its opening guitar line but follows its own course led by piano and a duel vocal from Jackson and Phillips. Despite the clearly intentional breaking of Circle of Days into vinyl-ready form, putting the just-under-10-minute title-track and closer “Eye in the Sky” together in semi-monolithic fashion on side B, “Walk Within” makes a telling centerpiece in terms of the band’s priority toward melody and a move past some of the more pointedly grunge-derived aspects of their debut. In literal 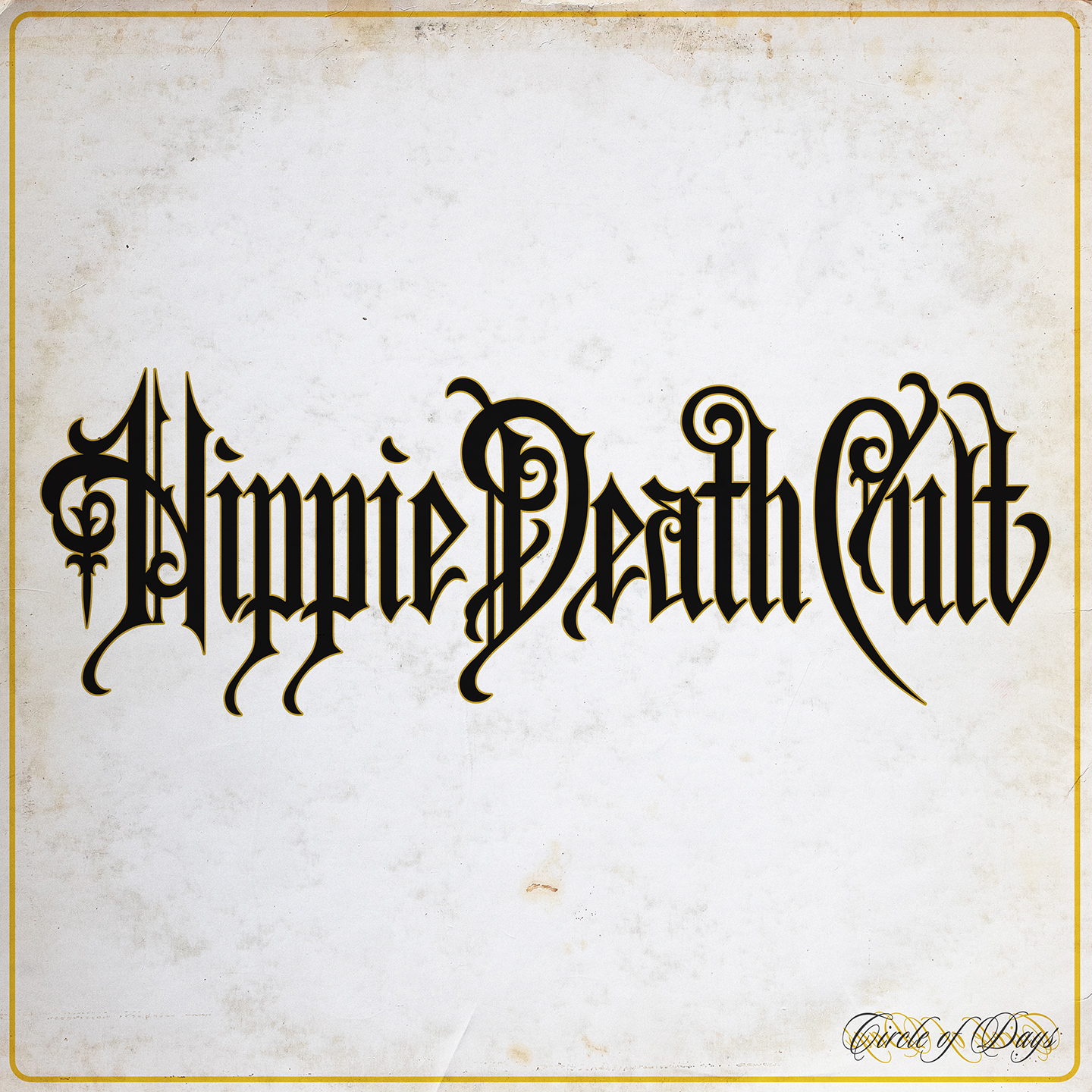 terms of the tracklisting, they are putting their progression at the center of the record for all to behold, following the assuring fuzzy roll of “Red Meat Tricks” and the outbound melding and toying with tempo of “Hornet Party” — not to mention the shred later — with something that pushes them to places in sound they haven’t yet been while also setting up the final pair of songs with its soft lead-out.

“Circle of Days” starts out relatively straightforward, but at 9:55 there’s plenty of room to flesh out and it takes advantage. Patient in its execution and solid in its construction, the immediate impression is that Hippie Death Cult have a plan, and they do. A scream and some muted crashes lead toward a pre-chorus making subtle use of janga-janga-janga stoner riffing before the title-line is finally delivered, giving the album its signature hook before rolling back to the verse. After cycling through again, they slow it down to back a guitar solo with organ flourish, and that’s how they end it, with the guitar reaching past the song and cutting before the fade-in ambience of “Eye in the Sky.” Like “Hornet Party,” the feel in its lyrics is a chronicle of our times, and as heavy rock overcomes its stigma against social critique — or at least acknowledgement in more than monster-laced metaphor — Jackson‘s vocals are a worthy method of delivery for the band’s ideas. “Eye in the Sky” is less readily verse/chorus than the song before it, but complements “Walk Within” in its atmosphere — even with drums — and in its build over most of its first half, it helps draw the diverse notions on which the album is based into a unified focus. Riffs are still there, and might be the foundation from which the song is based, but like the bulk of Circle of Days, “Eye in the Sky” spreads out in multiple directions, capping with matched-note leads from the keys and guitar and the residual echoes of a final crash.

Among its accomplishments of songwriting and style, Circle of Days establishes Hippie Death Cult as a more complex band on the whole. The melodic breadth they demonstrate, the periodic intensity of rhythm and the manner in which that’s offset by the overarching flow of the pieces that make up the entirety of the album speaks to their engaging with their material at its conceptual heart, thinking not only about what they’re saying in the bigger picture, but the instrumental and verbal language alike with which they’re saying it. For anyone who dug 111 or who might be encountering them for the first time with these tracks, this is invariably good news. They have added to, rather than subtracted from, their approach.

Circle of Days is up for preorder now ahead of the already-noted May 21 release. You’ll find those links under the player below, where you can hear “Hornet Party” premiering, and read some comment from Brnabic about the song.

“Choosing singles to premiere for this new album has been a bit of a challenge for us. Each song (as well as each song on the Doom Sessions split) feels really unique from one another and its tough to say that one really defines the album more than another. I kind of view us as more of an album band rather than a singles band. That being said, “Hornet Party” is the second song on the record following “Red Meat Tricks” so we are going chronologically for this one. I think it might be the shortest song on the album and it’s a total rager both musically and lyrically. It’s probably the most physically demanding song for each of us to perform on the album, but it’s our way of kind of holding up some sort of artistic mirror to the current climate that we live in. Extreme times call for extreme art, so…”

HORNET PARTY is the second single taken from the Hippie Death Cult brand new album Circle Of Days. The release will see the light May 21st via Heavy Psych Sounds.

Previous articleUS Doom Heavy Weights MOURN THE LIGHT Sign To Argonauta Records And Share First Teaser From Upcoming Album!
Next articleNIGHTWISH Vocalist FLOOR JANSEN Undergoes Gallbladder Surgery – “I Am Most Grateful For The Amazing Care I Received At The Hospital In Joensuu”