Long Beach, California-based four-piece Spirit Mother have the sound, look and mood pretty much nailed. Laced with echoing violin and lead guitar playing off each other in a song like “Martyrs” from their 2020 debut, Cadets (review here), if their inclusion as the third of five in the ‘Live in the Mojave Desert’ series left anyone scratching their head, the issue is promptly cleared up once they start playing.

Directed by Ryan Jones (also of the Stoned and Dusted fest), edited by Sam Grant with Dan Joeright of Joshua Tree’s Gatos Trail Studio doing sound and psychedelic oil projections lighting up Skull Rock — because where else? — by Lance Gordon and his Mad Alchemy team, the level of production, the sheer concert film-ness of ‘Live in the Mojave Desert’ remains staggering, and as parts of the country struggle to keep the lights and heat on and others are dug into cold winter chill, Jones and company successfully make the West-is-best argument seem moot.

As with prior installments featuring Earthless (review here) and Nebula (review here), Spirit Mother‘s ‘Live in the Mojave’ sets and lives up to a high standard. The first hour of the stream is dedicated to interview footage and the odd music video — a preview of Mountain Tamer still to come in the series, as well as clips from Stoned and Dusted and videos from Acid King and King Buffalo; all certainly welcome, content-wise — with Jones hosting in a kind of early-to-mid 1990s MTV atmosphere, including a few awkward moments preserved for posterity.

Unlike Earthless or Nebula, however, when Spirit Mother take the stage — by which I mean a kind of flat piece of land some distance away from Skull Rock, and, apparently, anything else, with lights on either side, projections around and behind and drones and hand-cameras (phones and not?) capturing it all — it’s already night. I don’t know why the band decided to start playing after dark, maybe it was just timing, but the decision meant more time for the liquid lightshow, and more Mad Alchemy is never a bad choice. Particularly for an act as atmospheric as Spirit Mother show themselves to be.

They start the set with what would seem to be a new song in “Toxic (Exodus Inc.)” and guitarist Sean McCormick and drummer Landon Cisneros, violinist/vocalist SJ and bassist/vocalist Armand Lance are immediately locked in. The vibe is vibe if you can vibe, like languid grunge blasted into outer space in the desert night. Credit to Cisneros, who puts on a clinic in holding together elements that a less capable drummer would simply watch fall apart in a cut like “Premonitions,” which begins the second half of the set after a quick break to find out everybody’s favorite live album — Allman Bros., Dave Brubeck, something classical from SJ I couldn’t quite hear over the wind — and ethereal bursts from Cadets like, indeed “Ether,” “Go Getter” and “My Head is Sinking.” 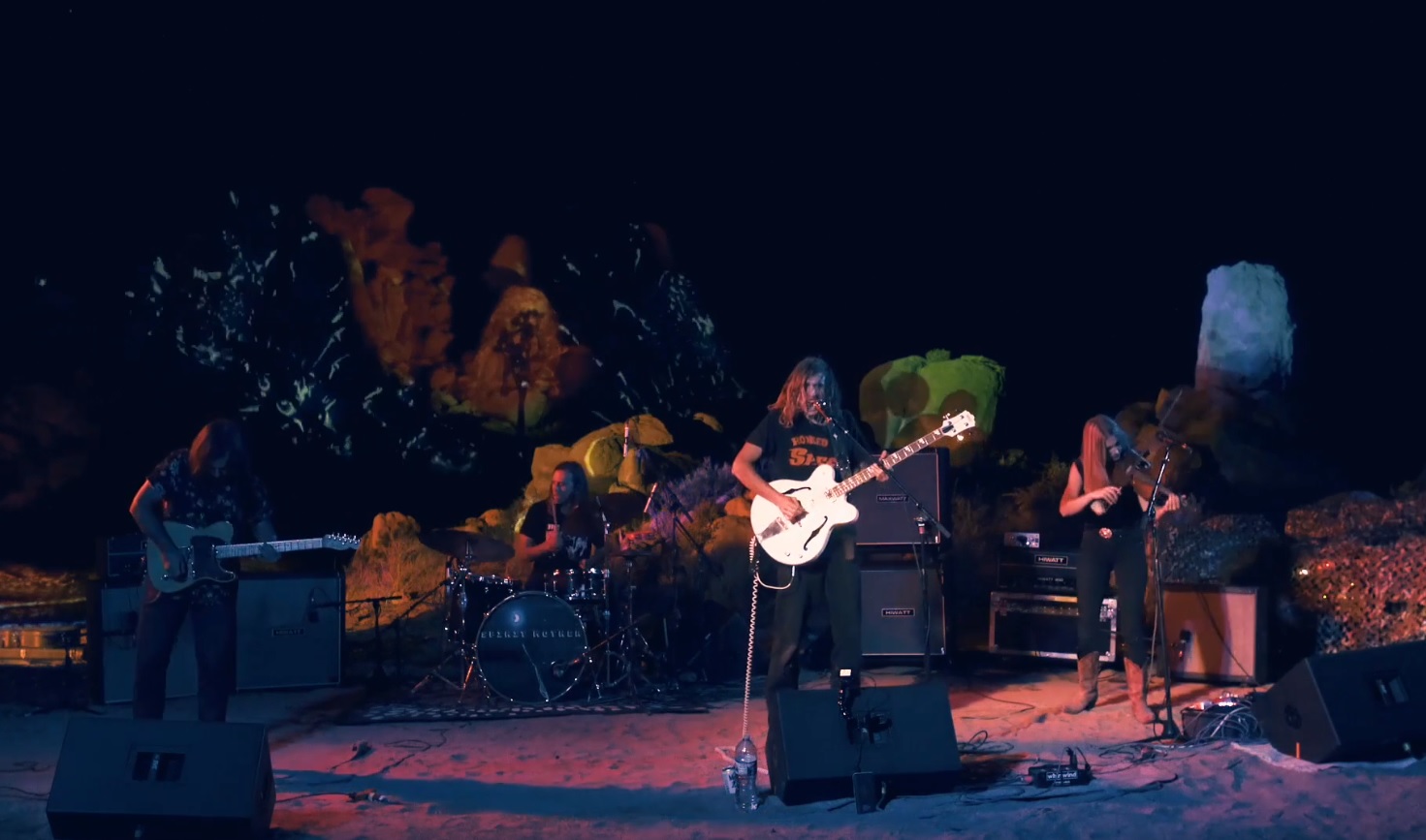 Spirit Mother‘s songs are fairly short, so they’re able to pack more in than, say, Earthless, and the double-effect that has is that it never quite lets them wander off. Lance as a vocalist is somewhere between grunge and shoegaze in his delivery, a classic sort of reluctance, keeping it casual as the bass drops out and returns to add impact to McCormick‘s steadier progressions of guitar. Off to stage right, SJ‘s violin fills out the sound with overarching melody as the movements grow more chaotic before cutting out cold, à la “Martyrs” or “Black Sheep,” both of which manage to take the listener/viewer for a ride in a little over three minutes’ time.

Her vocals feature more prominently on “Dead Cells,” which since my tired eyes can’t find it anywhere else I’ll assume is another new track, and that may be a hint of more active interplay between her and Lance in the lead role — she carries the song well and is a good match for Lance in attitude; belting “Dead Cells” out a bit works. Watching Cisneros playing “Space Cadets,” the opener of Cadets, one might be reminded a bit of The Golden Grass‘ Adam Kriney in style, but there’s not the same kind of underlying intensity that feels like it’s trying to break out, and so Cisneros operates fluidly with the lumber in “Space Cadets” and elsewhere, helping not necessarily to keep things grounded, but at least cohesive on its own level, the songs feeling almost willfully incomplete, because really, what’s the point anyway, man?

I can’t argue. Spirit Mother are so Californian I wouldn’t be the least bit surprised to find out they’re all originally from the Midwest, but they’re ridiculously suited to their purpose throughout ‘Live in the Mojave,’ locking in highlight grooves in “My Head is Sinking” or “Heathens” — the sudden stop there feeling especially cruel — which caps what turns out to be a pretty short evening’s set. It will make a killer live record — Italy’s Heavy Psych Sounds is seeing to that and I wouldn’t be surprised if they picked the band up for their sophomore studio release — but with the break in between, they’re at about 35 minutes of material, so yeah, a quick run.

In that time, however, they distinguish themselves in style and substance alike. Their songs function like poems rather than verse/chorus pieces, and the linear feel they bring about results in dynamic shifts as they play one into the next. The same was true of Cadets, of course, but to watch Spirit Mother playing live, even prior-recorded as this was, gives further insight into how they function as a unit, and with the new material, where they might be heading next. I only look forward to finding out.

The ‘Live in the Mojave Desert’ can’t take the place of a concert experience, and it’s to its eternal credit that it isn’t trying. Instead, it democratizes a once-in-a-lifetime exclusivity — that night that you just happened to be in the right place in Joshua Tree National Park to find this — so that everyone can be that person, in that place, feeling like they’re floating above all the more as the drones hover around Skull Rock. If that’s escapism in the pandemic age, that doesn’t make it any less beautiful.

Spirit Mother, “Space Cadets” from ‘Live in the Mojave Desert’

Live in the Mojave Desert tickets at Tixr

Stoned and Dusted on Thee Facebooks

Working With God (Ipecac Records/Liberator Music)is the 24th release by the Melvins and features their 1983 lineup of Buzz Osbourne, Dale Crover on bass,...
Read more

It is difficult to separate Acid Mammoth‘s third full-length, Caravan, from the context in which it arrives — and no, I’m not talking about...
Read more

Acid Mammoth. I mean, what’s not to like about that name? There’s mighty implications that this will be trippy, heavy and primal. Sounds like...
Read more
Previous articleColdwave Trio PAAR Debut Their Frosty Video for “Eis”
Next articleMammon's Throne – Forward Unto Flame (Full Album 2020)