Guesting on Rockin’ Metal Revival, Lynch Mob guitarist George Lynch (ex-Dokken) discussed the accusations made by some people that the band’s new re-issue of their milestone 1990 classic debut album, Wicked Sensation in a reimagined form, is a money grab.

Lynch: “I’ve read some accusations of a money grab. I’m like, ‘Boy, I’ll tell you what, this was anything but that, believe me.’ I’m not going to get into the nuts and bolts of our business, but there was no money to grab on this record. It was just done and I’m being completely 100% up front sincere about that very, very little money was to be made on this record. It was really more of just a fun project.

We thought it’d be relatively easy and fun to do, and it was the last time we were together as a band. We all worked together, the four of us in one room had a great time! Had a couple of beers, and we’d just all be fooling around the studio, trying different things laughing, ordering food, and just having and just enjoying the process and just having a great time. Nobody made a bunch of money on it, absolutely sure! So I wanted to dispel that rumor right off the top because that sort of did bother me, when I did get reached out from other people that it was just a money grab, I’m just like, ‘What? No, no, it’s not the money, anything but that, believe me.’

Everything was done purely out of love. And I’m really proud of the record and I’m glad we did it. As you said, you know it, it bears repeated listening, it doesn’t take away from the original, I think. It just adds contextually to the complexity of the band. We’re more than that, we were able to learn a few things in the last 30 years and we wanted to express that.”

Lynch Mob celebrate the 30th Anniversary of their seminal album, Wicked Sensation, with a special limited print/deluxe anniversary edition of the album. Wicked Sensation Reimagined features re-worked and re-recorded versions of their classic songs and is available via Rat Pak Records on August 28 (also available in Japan via Marquee/Avalon). Listen to “Hell Child” (Reimagined) below.

The twelve-track album, originally released in October 1990, is considered by many to be sacred and perfect the way it was. The idea of recording it was not something Oni Logan or George Lynch took lightly.

“The term ‘re-record’ makes me cringe, this is not that,” explains Lynch. “We re-invented the wheel on this record. It’s really a different animal than the original! Fans won’t be disappointed!”

Logan adds: “30 years later here we are celebrating the first song I penned and wrote for the band Lynch Mob ‘Wicked Sensation.’ This one’s for the fans that have been there from the beginning! My recommendation is to listen to it loud!!”

The new cover of Wicked Sensation Reimagined was hand drawn by mid-west comic artist Andrew Owens as a tribute to the original cover art. The album is available in multiple bundle configurations including: a limited print Yellow and Black splatter vinyl (Limited to 500), hand autographed CD bundles and cassettes and more. Pre-order here.

With the help of Robbie Crane (Black Star Riders) on bass and Brian Tichy on drums, George Lynch and Oni Logan bring passion and power into these newly created arrangements; some that take nothing away from the old versions but bring new light and magic to the material. The songs continue to sound as fresh and timeless and will be ready to garner a whole new legion of fans for the next thirty years. Wicked Sensation Reimagined was produced by Lynch Mob & Brian Tichy and mixed/mastered by Chris “The Wizard” Collier. 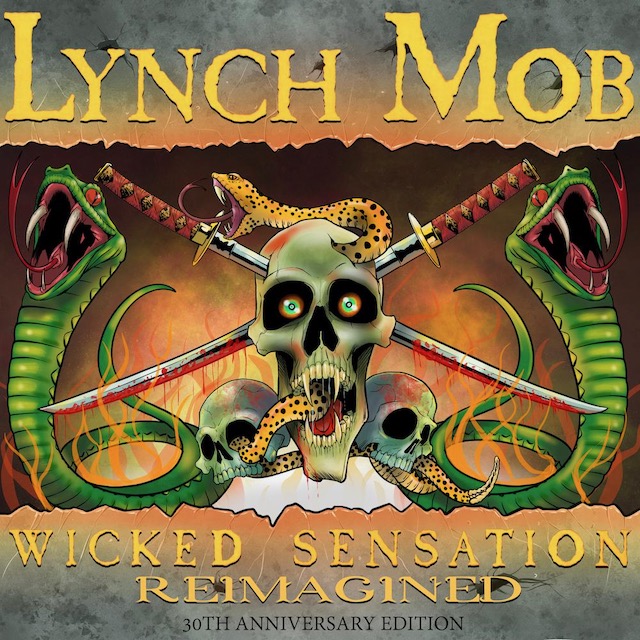 BATTLELORE Confirm New Music Is In The Works