Boston progressive heavy rockers Raibard release their second album, Dark Realm of the Daylight, on Dec. 3. The record is as proggy as the day is long and probably then some, and twists itself readily around its contrasts — dark, daylight, etc. — via an overarching organic sensibility as manifest through the vocals of guitarist Daniel Gil, who doubles both as a folk composer/performer and music teacher, drawing on elements from Jewish traditionalism (he’s also a Talmudic scholar) and classical arrangements. His “Peacemaking in Three Movements” — not by Raibard, but available to listen here — is gorgeous.

In Raibard, Gil is joined by bassist Greg Dellaria (also Oxblood Forge) and drummer Phil MacKay, both veterans of sludge metallers Ichabod, and across seven tracks, the three-piece weave together stretches of ’70s-style progressivism, jazzier fluidity, and indeed, flourishes of folk melodies. The PR wire’s noting of Opeth as an influence is apt given Gil‘s breathy vocal approach and some of the bouncing nuance of guitar, but from “Angel of the Clockwork” on through the seven-track/46-minute offering, Dark Realm of the Daylight sets its purpose across a range of styles and fluidly weaves between them.

At the core of Raibard‘s presentation in this follow-up to 2017’s The Queen of the Night, however, 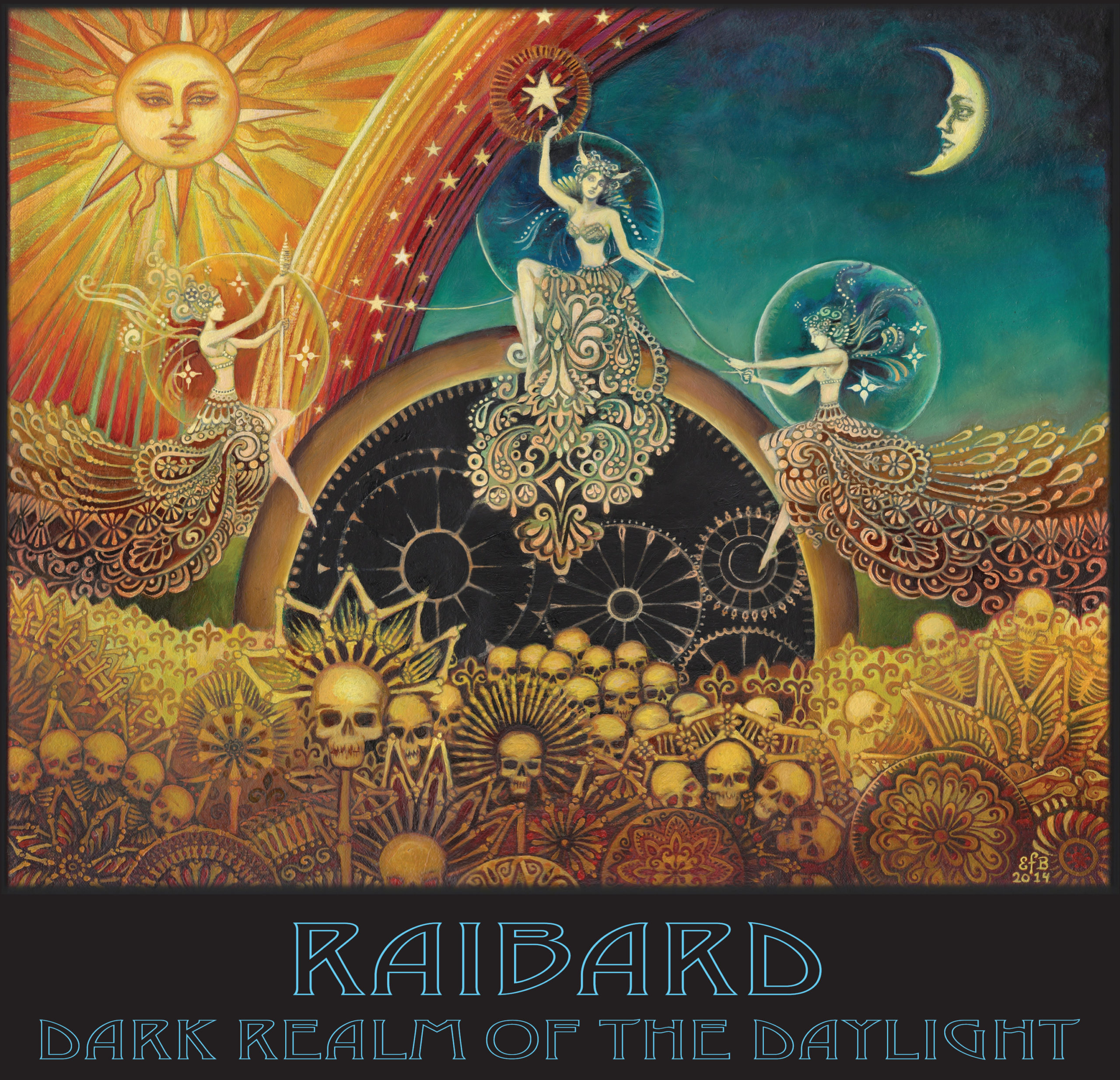 is the blend of the natural, as-sans-studio-trickery-as-can-be vibe — dry vocals, acoustic guitar, not trying to be huge sounding or anything like that — and the breadth of the material. This is a balance not so much walked as danced upon throughout, as “Angel of the Clockwork” and the catchier title-track give way to the electrified “Eternal Rise,” bringing Michele Morgan in for guest vocals over loosely Eastern scales and a more atmospheric feel, but still remaining consistent with the surroundings — though the sun-baked, near-Blind Melon twang at the outset of the subsequent “Visions of You” feels like a willful, playful contradiction as the centerpiece unfolds.

“Forever After” and “Walkin’ On” both dare more electric guitar, the former heavier, the latter jammier, both underscored by Dellaria and MacKay‘s it’s-cool-we-got-this surety as a rhythm section, right up to the drum-solo-into-wah-funk as “Walkin’ On” meanders through its second half, casual-like, making its way toward a minimal acoustic conclusion that leads into “To the Dawn,” which rounds out.

And the closer — which is premiering below — is a somewhat humbler affair, but brings a flourish of horn (or horn sounds) to its ending that hints at a George Martin arrangement influence as part of its progressive folk rock foundation. Melody carries through unencumbered by weight, but the structure beneath is solid and the chorus memorable just the same, and in that, “To the Dawn” is emblematic of Raibard‘s work here on the whole. They dig into the exploratory aspects of songcraft, but do not lose their footing as part of that, and even when they ‘walk on,’ as it were, they do so in contemplative rather than directionless fashion.

Raibard on “To the Dawn”:

The world has everything we need, and it has nothing we need. The human experience is full and complete, and it’s empty and meaningless. Between the fullness of life and the inevitability of death we find the most complete thing — a heart which is broken wide open to sing and make art.

Based out of Boston, Massachusetts, the dynamic rock trio, RAIBARD was founded in December 2015 by Daniel Gil and they draw upon musical inspiration from rock and metal bands including LED ZEPPELIN, THE BEATLES, and OPETH. Daniel also brings in his interest as a modern mystic; someone who experiences hidden realities and studies ancient texts on mysticism. The title track on the new album is inspired by author and teacher Tony Buzan who teaches about mind mapping and the genius of every single human being, promoting the advancement of consciousness through inner awareness and compassionate living.