[Click play above to stream Jack Harlon and the Dead Crows’ The Magnetic Ridge in full. Album is out May 17 on Psychedelic Salad and Forbidden Place Records.]

Based in Melbourne, Australia, with a sound that reaches across continents, Jack Harlon and the Dead Crows return after three years with The Magnetic Ridge, their second full-length and the follow-up to 2018’s well-received Hymns debut. The new offering finds band-spearhead Tim Coutts-Smith carrying over some of the elements that helped make the first record such a success. He produced, mixed and mastered The Magnetic Ridge‘s 12 tracks himself (10 on the vinyl), donning role of Jack Harlon III at will in the songs — the closest thing I could find to a lineup around him is Lightning Bolts Richardson, The Ghost of Ed Parsons and One Giant Pig in the group with Coutts-Smith — and Adam Burke‘s stirring cover art again features, as the sound holds firm to a heavy Western/psychedelic tonk feel and an overarching narrative construct.

Opener “The Tale Of” feeds directly into “The Magnetic Ridge,” and the way the two titles play off each other might lead one to believe the former is just an intro, but its substance is broader, and in fact it cleverly showcases much of the range that will stretch across the rest of the album that follows, going from its minimal, cinematic guy-and-guitar storytelling to a resonant, weighted soundscape of layered guitar, bass and crashing drums in its final moments before giving over to the transitional noise that stops with a snare pop as the riff to the title-track signals its own takeoff. Just then, all is thrust and all is vital, but though The Magnetic Ridge has plenty of brash fare in the West Coast US-style shred of side B opener “Stray” or the presiding bombast in the crescendo of the prior “Langolier,” among others, the core of their approach is more about the dynamic, the intertwining of different melodies and rhythms and energies to enact an aesthetic familiar in its heavy blues foundation — All Them Witches circa Lightning at the Door are a distinct presence — and given its own personality through Coutts-Smith‘s conceptual framework and performance.

Likewise, there is a strong commitment to atmosphere. The digital (and presumably CD) version of The Magnetic Ridge pushes deeper in this regard than does the vinyl, but even the LP boasts “De la Luna,” a 90-second stretch of warm heavy psych guitar following the title-track that allows a breather after the initial salvo, sets up the shamanistic Doors-ness of “Rat Poisoning” and offers a hint of Colour Haze-y influence even if that comes through the filter of the aforementioned All Them Witches. In any case, it’s an attention to detail and tone that works entirely to Jack Harlon and the Dead Crows‘ credit there and within subsequent tracks, as one can feel the narrative shifting and twisting in the music even without the benefit of a lyric sheet — or at very least, one can imagine it doing so. 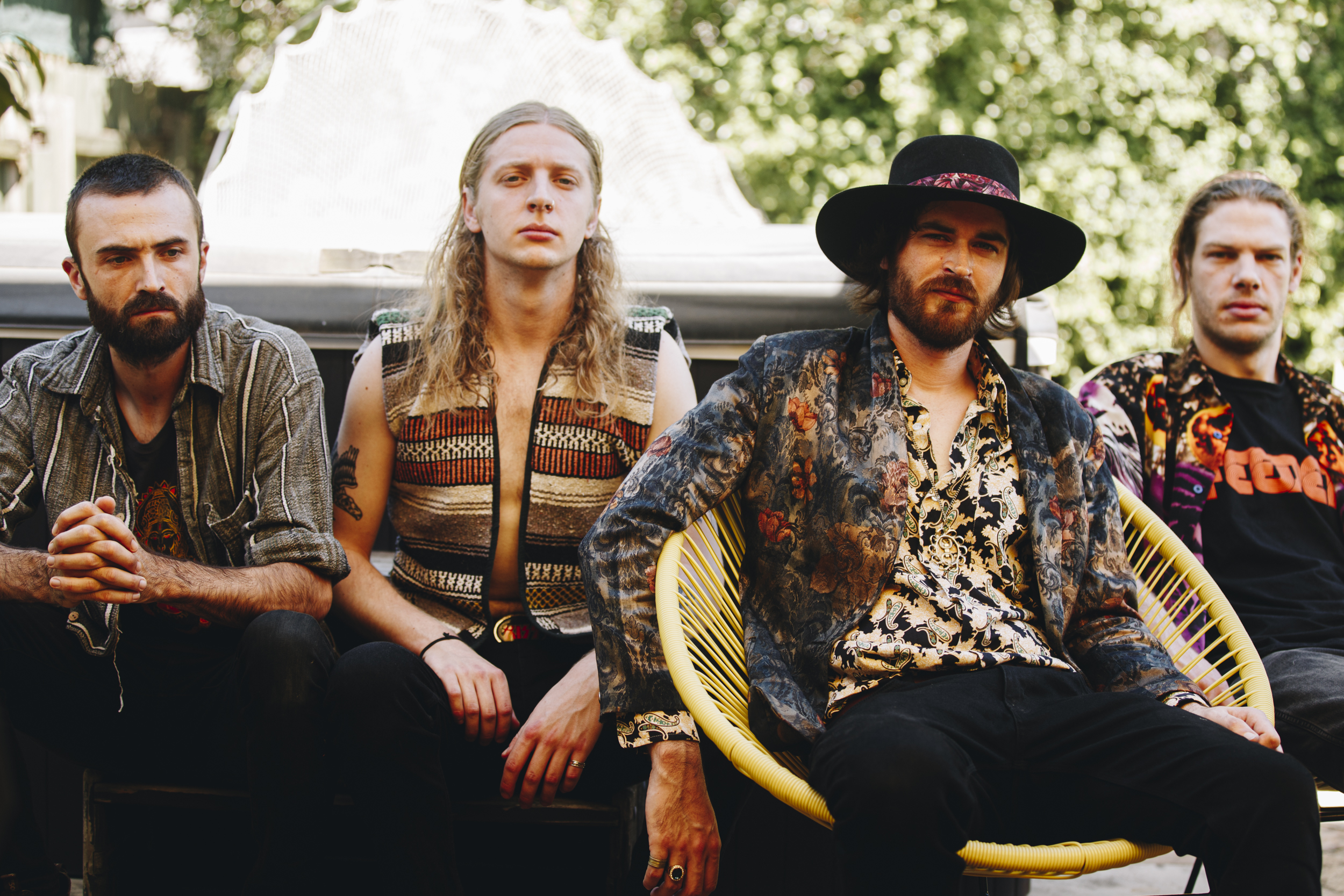 Ambience is further fleshed out in linear formats by “Dream Sequence 1” and “Dream Sequence 2,” two brief inclusions of manipulated voice samples; the latter is William Melarc’s LSD test, the footage of which is widely available. These provide transitions in sides A and B, the first bringing about the immediate shove in “Langolier,” and the second the more gradual meandering lead-in jam for the preach that comes in “The Painter in the Woods,” but both serve a purpose of creating an impression, bolstering the lush, otherworldly vibe and further enabling Coutts-Smith and company to put the listener where they want them to be, as might a film, novel or other vehicle for storytelling. As it goes, “The Painter in the Woods” is about as tripped out as The Magnetic Ridge gets — though that’s not to take away from the open-landscape breadth of “Rat Poisoning” earlier on — and its being sandwiched between “Stray” and “Absolved Pt. 1” is effective in that there’s a grounding feel as the latter takes hold in a more intense rush of fuzz.

The drums will settle, such as it is, into a shuffle, but the tension is still there for sure and the shouting vocals reach out from the depths of the mix such as to make it even more spacious. The melodic resolution there, subtle and ceding to the return of the central riff to begin “Absolved” Pt. 2,” is a high point of craft, as is the linear build that follows. Breaking the two tracks up will not matter to someone hearing it on vinyl, but it’s a clear signal of the structural change around that same progression and further evidence of the thought put to the work on the whole.

Amid all these haunting ghosts and howling winds of guitars, such poise and clarity of vision isn’t to be ignored, but there’s more to The Magnetic Ridge than cinematography. Each song offers its own plot of the wider sphere, from the scene-setting in “The Tale Of” through the “Absolved” duo pushing to where the limits go. Ultimately, this journey brings the listener around to the patient, gets-loud-but-not-too-loud credits roll of “Black Road,” a finale that doesn’t try to top “Absolved Pt. 2” as to provide a denouement from it, an engaging last show of melody and trance-inducing psychnosis. Thusly subdued, Jack Harlon and the Dead Crows wrap their sophomore outing to fit with how it opened, less than predictable, not entirely unfamiliar or so willfully weird as to forget songwriting, reckless only when it wants to be, just as they have been all along.

As regards the strengths of the album as a whole, this is no less overarching than the thread of the plot unfolding, and the control Jack Harlon and the Dead Crows so ably wield over their material makes it that much easier and more of a joy for the audience to be led across the span, littered with dry bones, sunbaked dust and scuttling life on the fringes as it may be. There’s still forward potential here as the band moves toward individual realization, but the lure of The Magnetic Ridge is not to be understated. I’d read this story.

Jack Harlon and the Dead Crows on Bandcamp