The Awkwards at The Waterloo Music Bar [Live Review]

Welcome to the world of The Awkwards, a brand new Blackpool-based punk band who might just be your favourite band of this year.

This three-pronged attack of pure punk energy consists of bassist and vocalist Adrian Green; guitarist and vocalist Michael Rigby and drummer and vocalist Gary Hanson. The Awkwards were born out of a previous band, a seasoned four piece named Dysphonia. As Rigby explained, “Punny answer: an awkward situation. A four piece didn’t work so we decided to be a three piece.” 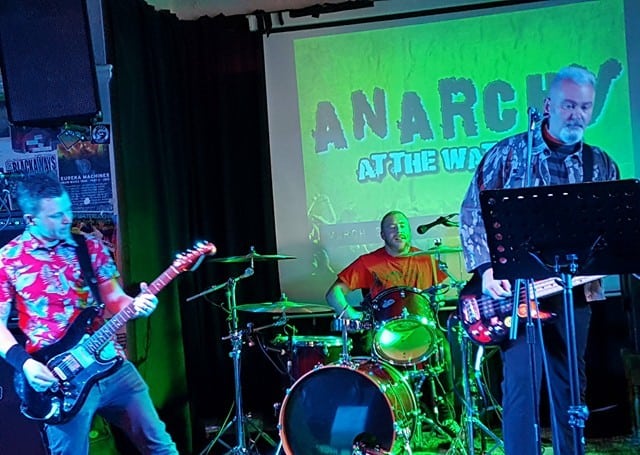 On arriving at The Waterloo Music Bar, Blackpool’s premier live music venue, I already had high expectations from this band, having heard their song ‘Being Awkward’ through a rather stunning YouTube video, filmed by Rigby on his iPhone 8 using a clip on fish eye lens and edited on the phone’s iMovie app. The Awkwards are true DIY in the tradition of the 1977 wave of British punk in every way but with a modern twist. My first glimpse of what might be my favourite new band was the sped-up helium-style introduction of the ‘Being Awkward’ video, which was a pretty clear indicator that this band was one based upon pure fun and enjoyment.

After a cheery wave from the band, some pre-gig pictures and some amusement caused by Rigby’s exquisite Hawaiian shirt and Hanson’s ironic Dysphonia T-shirt, complete with sacked band member cut out, the stage was set for what might be the most exciting short sharp shock of a gig that I have seen so far this year.

As The Awkwards launched full throttle into opening number, ‘Close Encounters of the Third Kind’, Green’s throbbing bass reverberated around the room like an untamed animal, Rigby’s razor sharp guitar intercut proceedings with imaginative vigour and Hanson’s forceful backbeat pinned the audience to the back wall. After the audience had managed to peel themselves from the plaster thinking that surely this band must have burnt themselves out on the first number, they raised the bar for the second number, ‘Down in the Garden’. With its lyrical witticisms (“What you doin’ in my garden, what you doin’ in my shed, I got really sharp tools, you gonna end up dead”) and punchy stop-start musical accompaniment, ‘Down in the Garden’ was the earworm of all earworms and is still burrowing deeper and deeper into my subconscious as I write this review. 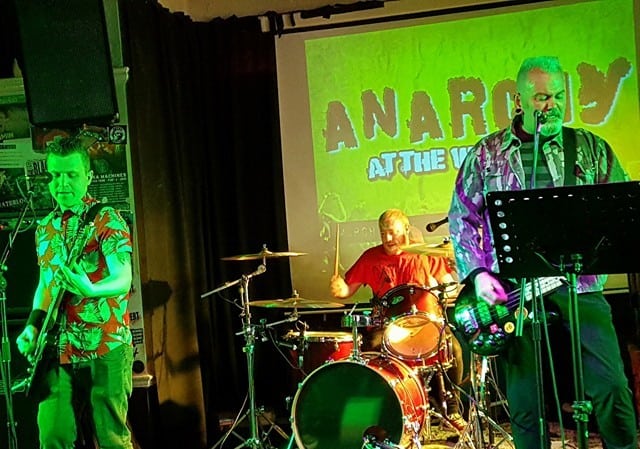 However, as evidenced by other songs in the set, such as the Buzzcocks-esque ‘Why You Looking At Me’ and ‘Daycare’, this is a band with songs so catchy that in a parallel universe, they sell a million copies of every single and spend 52 weeks of the year at number one on the singles chart. And just in case you were left in any doubt of this, there is the aforementioned ‘Being Awkward’, in which they have cunningly created a theme song so memorable that it makes ‘(Theme from) The Monkees’ sound like free-form jazz.

Elsewhere in their set, The Awkwards reveal their already obvious imagination more with ‘Solution’ and ‘Zombies’, a duo of apocalyptic-themed songs.  ‘Solution’ is a stark warning about the dangers of global warming, whilst ‘Zombies’ could be seen as its sequel if we do not heed it.   This is a band who not only have an ear for simple and effective tune but also have a prowess for lyrics which will leave many of their peers in the punk fraternity gasping for breath.

The sheer brilliance of the songs in their eleven song set is not The Awkwards’ only strength. This is a naturally charismatic band whose interaction with the audience is more entertaining than that of some bands who have been in the music business for years. This inherent charm was also evident when I interviewed the band following the gig. When I asked about their plans for the future, Rigby replied, “Music lessons. We will be going back into the studio, we have so many more ideas, and playing around the country.” In fact, the next move for The Awkwards was a prestigious support slot with punk legends Chelsea at the New Continental in Preston on the 21st April.

Watch out for The Awkwards in 2018. I was already hooked after hearing one song but having seen them live, I am in no doubt whatsoever that I have just witnessed the beginnings of a band who have all the makings of future punk legends.

Dan Rose – My Heart Belongs with You EP [Review]