For this tour, beyond the group’s founder and leader, Anton Newcombe, the lineup consisted of guitarist Ricky Maymi (also a founding member); long time bassist Collin Hegna; keyboardist/guitarist Ryan Van Kriedt; and the newer members — guitarist Hákon Aðalsteinsson and drummer Uri Rennert. Thankfully, the much beloved Joel Gion also made the scene with the tambourine!

After a deafeningly loud and highly theatrical set by opening act Mercury Rev, The Brian Jonestown Massacre commenced its set with the killer tune ‘We Never Had a Chance’ from its 2019 eponymous album. With it’s chord structure recalling John Lennon’s ‘Gimme Some Truth’ coupled with Anton Newcombe’s spot on lyrics concerning the dystopian state of contemporary reality as our planet is going to hell thanks to the venal greed of the corporate overlords and the corrupt nature of the political elite, I consider ‘We Never Had a Chance’ a strong contender for best BJM song of the last decade!

There followed quite a few new heavy psychedelic “wall of guitar” songs which Newcombe created back around 2020, during the height of the COVID-19 pandemic. I have to say that for myself–as well as for presumably thousands of fellow BJM fans–Anton’s output at that time really helped me to endure and get through the depths of despair which the pandemic unleashed. Finding a new BJM demo song posted up on YouTube almost every day for many months on end in 2020 was a sonic blessing and a soul saver!

Among the newer tunes performed at The Wiltern were: ‘Your Mind is My Cafe’; ‘Charmkins Attack’ (this song is a seeming bastard offspring of Donovan’s ‘Sunshine Superman’ but perhaps named in tribute to both Blur’s tune ‘Charm Attack’ from several years back as well as the Charmkins toys produced by Hasbro during the ’80s?); the hauntingly beautiful affirmation to overcoming adversity ‘The Future Is Your Past’; the righteous romanticist Sturm und Drang of ‘The Real’; the outstanding ‘Fudge’; ‘Do Rainbows Have Ends?’; ‘Wait A Minute’ (2:30s To Be Exact); ‘You Think I’m Joking’; ‘Don’t Let Me Get In Your Way’; ‘The Mother of All Fuckers’; and the totally awesome and hypnotic cut ‘# 1 Lucky Kitty’–on which drummer Uri Rennert really got to cut loose on the drums, evoking The Who’s early phase with Keith Moon-esque percussive splendor and splashiness! Many, if not all, of these 2020 songs should be released later this year on two new BJM albums–the first one will be titled ‘Fire Doesn’t Grow On Trees’, and the second one, as yet, remains untitled.

Interspersed between the new material, the band performed ‘Drained’, ‘Forgotten Graves’, and ‘A Word’– from the 2019 eponymous album; ‘Hold That Thought’ — from the 2018 album ‘Something Else’; ‘Pish’–which was perhaps the most sublime and transcendent song of the night–from the 2015 Mini Album ‘Thingy Wingy’. Of course, some classic old school BJM tunes were also thrown into the mix, and fans were stoked to hear ‘Servo’, ‘When Jokers Attack’ and–best of all–outstanding renditions of both ‘Anemone’ (with guest vocals by Mara Keagle, who sang on the original recording) and ‘Nevertheless’–the perennial badass track with its ‘Under My Thumb’ cadence–both of which elicited roars of approval from the fans.

The set closed with the guitar techs joining the band to jam through another new song, ‘Abandon Ship’, after which the band exited while Anton let some heavy distortion drone through the assembled amps!

On the whole, it was a great evening and set! Although Anton did lightly chastise the new drummer at one point regarding the correct percussion on one of the classic tunes (which did make me slightly nostalgic for old BJM drummer Dan Allaire’s high-energy kit bashing); and at another point he demonstrated to the group like a disgruntled maestro the exact tempo he wanted for a new tune, it appeared that he was having a good night overall–especially after receiving a brotherly moral support hug from Joel Gion! Also of note was Ricky Maymi’s ecstatic dancing while playing guitar! There were also a few in between song anecdotes–including Joel’s shout out to LA, Anton’s soliloquy about donating to Oxfam and observations on the tragic situation in Ukraine, and his recollection of being a teenager in the ’80s and sitting way in the back of the Wiltern’s balcony with a couple of uninterested girls he invited to see David Sylvain’s Secrets of the Beehive tour — which inevitably lead to him cracking a “Chicks don’t dig Robert Fripp” joke! 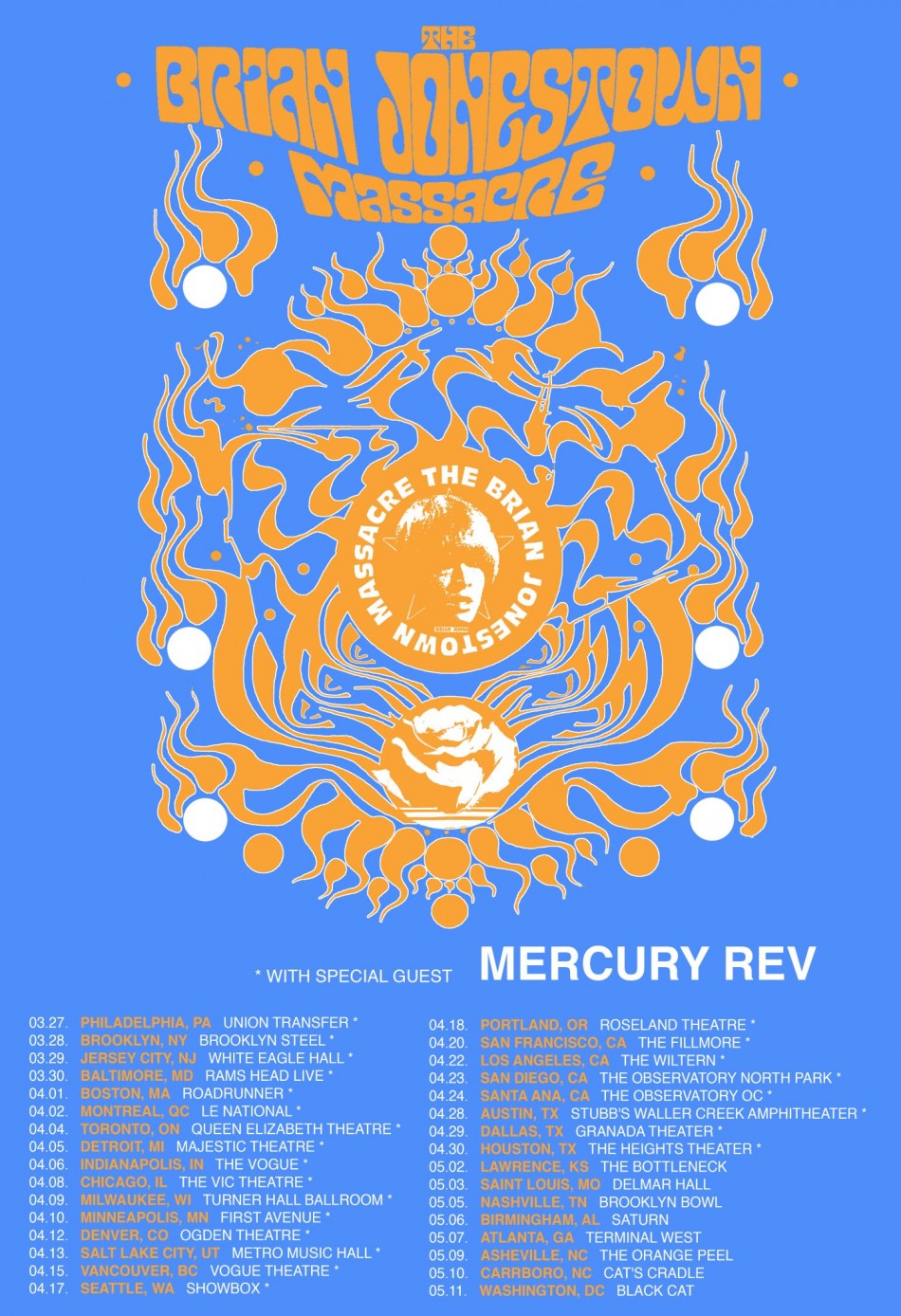 At this point in his music career, the prolific Newcombe has to take calculated risks in presenting a plethora of new songs while at the same time trotting out some of the classics. That being said, I would have liked to have heard the grooved out, up tempo numbers “Silenced, ‘Tell Them No’, and ‘Refresh’ from the 2020 cuts. As far as the slightly older and classic cuts, it would have been cool to hear ‘Psychic Lips’; (which I consider a way better song than ‘Drained’); ‘Don’t Do That’; ‘Stairway To The Best Party in The Universe’; ‘It Girl’; ‘Who’; and ‘That Girl Suicide’– maybe some of them will get played next tour! But the true artist’s lot is never easy–especially when fans bitch about small things…so I’ll express gratitude instead for Anton Newcombe and the BJM making the world a better place to live in by making people happy through making art everyday.