VIDEO PREMIERE: Rebreather, “Choke on It”

Ohio noisemakers Rebreather return with their first full-length in 13 years, The Line, its Width and the War Drone, on Dec. 3. Out through Aqualamb Records, the offering was first announced in August, and at that time, a video was unveiled — also it involved actual veils — for the song “Drown” that saw the band collaborate with fellow Buckeye Staters Frayle, whose Gwyn Strang brought extra-witchly vibes to the intermittently bursting aggression of the atmospheric sludge behind her. By answering back now with “Choke on It” — premiering below — the three-piece of guitarist/vocalist Barley Rantilla, bassist Steve Wishnewski and drummer Steven Gardner bring into emphasis two essential truths about their cumbersomely-titled comebacker. First, it is a multifaceted beast of a record. Second, this band can fucking wail.

In both these things, The Line, its Width and the War Drone is largely consistent with where Rebreather left off, and hints of where they’re at today have been dropped since they started playing again, both with their 2018 self-titled EP (discussed here) and their earlier-2021 covers two-songer, Pets / Orange Crush (review here), for which they brought their spin to tracks by Porno for Pyros and R.E.M., respectively. The former shows up on the full-length as well — not so much “Orange Crush” — and it’s one more in the melee of shifts the trio present across the entirety, from the beginning punk-grown-up urgency of “Sick Sick Sick” through the languid, heavy post-rock unfurling of “It Comes in Threes,” which follows immediately, and down through the aptly-titled closer “Closer,” runs comes through like some kind of rawer Youngstown edition of the Desert Sessions crashed into indie rock whateverism. I thought it might be another cover. Maybe it is. It’s a big world. There’s a lot of songs in it. In any case, coming after “Pets,” as “Closer” does, the ’90s vibe runs strong, but again, Rebreather are not at all a 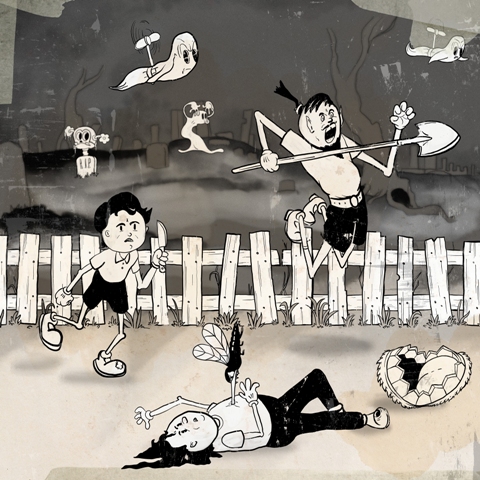 do-one-thing kind of outfit, and nearly 20 years on from their debut, their fifth long-player is a welcome refresh of their particular approach.

“Choke on It” arrives at the probable end of a vinyl’s side A, and in a linear format is part of a crucial midsection to the record. It is preceded by “Silent H,” which runs just under five minutes and is likewise broad in echo and weighted in tone. There are guest vocals — these by Shy Kennedy of Pittsburgh’s Horehound — that add to the patient march, peppered with chugging builds and moving to a culmination marked by a higher-register feedback tone (as well as a lower one) that follows a payoff wash that, to call it noise would be doing a disservice to its intentional fullness. On the other hand, “Choke on It” is as raw and intense as The Line, its Width and the War Drone gets, and no less purposeful in that. Gardner‘s drums are furious to coincide with Rantilla‘s frantic vocals, and the low end that steps forward in the take-a-breath bridge is a subtle foreshadow of things to come as side B launches with “Residual Madness,” a song atmo-sludge enough to play slow motion off of Neurosis “Stones From the Sky” while set atop a bed of feedback that is there at the outset, runs through much of the song’s six and a half minutes, and is the final piece to end, providing a direct transition into “Drown” as the start of an even-more-dug-in side B.

What do we learn? The core lesson of Rebreather is that Rebreather are underrated. They always were. In an age before post-metal happened, they already had their own take on it, and as time has gone on, the emergence progressive heavy microgenres has only proven them right. What’s better, The Line, its Width and the War Drone has none of the pretense to which it would probably be entitled. Wishnewski, Rantilla and Gardner hit it with an attitude that’s straightforward, sans-bullshit and this-is-who-we-are enough to birth any number of wax-poetic Rust Belt analogies. No time for that garbage. There’s a song to stream.

If The Line, its Width and the War Drone is your first exposure to Rebreather, awesome. It’ll make a great place to start. Their Bandcamp has all their past work, for further investigative purposes.

Enjoy “Choke on It” below:

Rebreather, “Choke on It” video premiere

Barley Rantilla on “Choke on It”:

Steve Wish (Steve Wishnewski, bass) came up with the initial riffs and title for “Choke on It.” We needed a good finale for the song, so we pulled a riff out of a song Gardner and I had been jamming on years earlier and Frankenstein-ed it together. It worked perfectly. The lyrics are all over the place; I worked backward from the title. The dumbed-down explanation would be a theme of trying to get along better with the people around you. About listening more and thinking more about what you’re saying. Choke on those words you wanna spit out initially.

The “Choke on It” video was really a trial for a filming strategy that we had devised. Attach three cameras in a triangular pattern, aim one at each of us, and randomly turn them as we record. This way, we will all be constantly shuffling around the screen. It was kinda last minute, but we hit up a few friends, went to Westside Bowl, and set up on their patio. We asked our friends to “act as usual while we stare at these cameras.” We shot three takes and liked them all, so we decided to use nine frames instead of three. We did this two hours before we shot the “Drown” video with Frayle. Apologies to them for us showing up a bit tipsy. Such a fun day.

Produced by Rebreather and mastered by Carl Saff (John Carpenter, Bongzilla, Elder), ‘The Line, Its Width, and the War Drone’ takes trickles from both the band’s past releases and 20 years experience and coalesces the trio’s “cave pop” into a roaring river of soaring sound. Flush with oddly accessible, dazzlingly tight metalcraft, ominous, propulsive basslines, and a rampaging rhythmic verve, the record’s widescreen sheen gleams with a mercurial mystique befitting of only the most tight-knit, veteran units. Today, Rebreather releases a video for the new song, “Drown”, which is a true collaboration with fellow Ohioans and Aqualamb lablemates Frayle.