Raleigh, North Carolina, duo Crystal Spiders release their second album, Morieris, Oct. 1 on Ripple Music. That date puts it about a year and six days from their Sept. 2020 self-titled debut (review here), and yet the sense of growth is palpable from one to the next and the lineup has somewhat shifted around founding members bassist/vocalist Brenna Leath (also The Hell No, Lightning Born) and drummer/backing vocalist Tradd Yancey, bringing in Mike Dean — best known as bassist for Corrosion of Conformity, but also a bandmate of Leath‘s in Lightning Born — as the third of a sometimes-trio on guitar. His guitar, in fact, is the first thing you hear on the record.

That’s no minor change and Dean‘s contributions throughout the eight-song/45-minute outing are significant, from the hypnotically rolling riff of “Morieris” itself to the fuzzy lead line in the second half of “Septix” (premiering below) that’s like a successful gritty reboot of Kyuss‘ “Demon Cleaner” and onward hooky closer “Golden Paw,” which starts as another nodder until at 2:19 into its 5:14 it suddenly shifts into a solo jam — don’t worry, the nod strikes back; which, if you wanted to think of as an alternate title for the entire proceedings here, I wouldn’t be able to argue. Nonetheless, as much as Dean — who also produced this and the first album — brings to the songs, there’s just about no way in listening that Leath‘s vocals aren’t a focal point. Often in layers, the verse melodies and smoothly executed choruses carry through with a room-reverb that sounds like it’s ready to break down walls pressing in.

The separation of the instruments in the recording, likewise, gives each a place of its own in the mix. The speedier, sample-laced “Offering” is that much clearer in its Misfitsian purpose for its bass and drum showcase. It goes someplace markedly less Misfitsian, mind you, but that core rhythm is never entirely absent. And whoever’s doing what at a given point, whether the guitar is moving in and out of the arrangement, or the bass is about to take a forward spot, or that and the drums are about to disappear and it’s the vocals taking over, Morieris never quite becomes predictable, and it never loses that sense of choose-your-adventure in you want to listen, by which I mean that if you want to put it on and follow the drums, they’re ready to go, and likewise each track. Everything is so clear and yet raw in sound that the recording itself is a character among everything else. 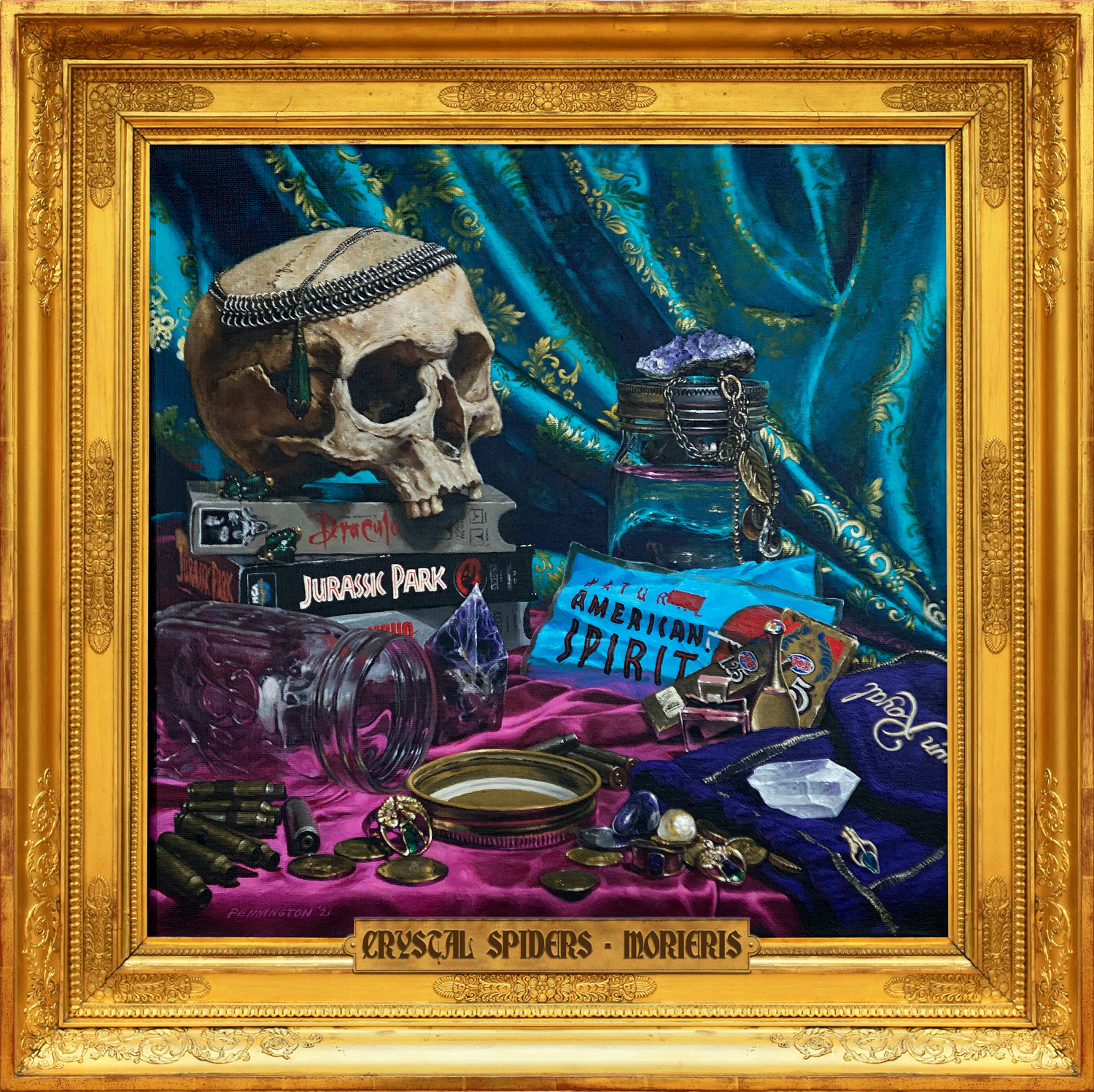 slower than Crystal Spiders‘ debut generally, but then how to explain “Offering,” or the side B leadoff “Pandora” or even the galloping outset of penultimate cut “Maelstrom?” The truth is, the slow is slower and the fast is faster, and the shifts between the two can be stark, as when “Harness” leaves behind its Dio Sabbath-era sprint for a break into a languid, at-least-dual-layered solo, then hits back in to re-gather the wind with that main riff just before the four-minute mark. And if a more plodding overarching impression might win the day, there’s no question the eight-minute “En Medias Res” is a part of why. The longest track included, it willfully consumes the momentum coming out of “Pandora” — an ample meal — and unfurls Morieris‘ melodic highlight atop its most atmospheric instrumentation, daringly slow and dirty-psychedelic.

It’s also the most immersive, and the most effective in creating a sense of space in its echo, and it would make a fitting closer if “Maelstrom” and “Golden Paw” didn’t so much to earn their final-duo placement. The former is a wakeup slap from the far-gone finish to “En Medias Res” at the beginning and end with that callback nod between, and the latter marries that laid-back-feeling, rolling groove with a memorable chorus, as on the title-track or “Harness” earlier, and gives final undulations of fuzz worthy of riding out as they do. Perhaps with a sophomore outing it’s not saying as much, but Morieris is Crystal Spiders‘ most complex material to-date. Their songs play out in various structures that feel intentional in their construction as well as where they show up on the album itself. At the same time, it’s a hard record to write about because I keep losing my head while listening. There it goes again, following another pied-piper bassline off a cliff into the guitar solo.

Still, if that is to be the order of the day from Crystal Spiders, it’s only a win and forward progression for the band. Morieris builds on the self-titled, is more confident in its approach and works to explore new ideas of how to form their particular place in heavy rock. Are they a blues band? Are they sludge or stoner rock? Doesn’t matter even a little, since by the time they’re underway in song one, they’re carrying the listener with them in the manner of a band who know who they want to be. Less than a year later, Crystal Spiders come through with a more refined sense of vision and the work they want to do in heavy. They are pushing themselves in the moment while maintaining a sense of forward potential for things to come. Would they do an entire album like “En Medias Res?” Or like “Pandora?” Would that be Crystal Spiders? Somehow, one gets the feeling they revel in the changes.

You can hear one of them in the accompanying video for “Septix,” premiering here, followed by more from the PR wire.

Dan Rose – My Heart Belongs with You EP [Review]