Amon Amarth to Make History with The Great Heathen Tour

Amon Amarth to Make History with The Great Heathen Tour

Following the news that they will make history as the first extreme metal band to headline the Kia Forum this December, undisputed kings of Viking heavy metal, Amon Amarth, have today announced that the historic evening will be celebrated with another first of its kind as terrestrial radio’s queen of hard rock Full Metal Jackie combines forces with Sirius XM’s Jose Mangin (Liquid Metal) to co-present the Los Angeles event in celebration of the metal genre.

Amon Amarth will be bringing their infamous theater production to their North American tour, a spectacle that fans have come to expect over the course of their touring career. Additionally, full-scale European production is coming to North American arenas this winter when they play the world famous Los Angeles Kia Forum, Place Bell in Montreal and Hammerstein ballroom in New York City as part of their gargantuan The Great Heathen Tour. The band have released a brand new tour teaser which gives fans a small taste of what to expect and can be viewed HERE or by clicking the image below. Get your tickets for The Great Heathen Tour HERE.

Along with their awe-inspiring stage show, featuring Viking ships, a Viking helmet drum riser, live battle reenactments, the now infamous “Viking Row” and enough pyro to raze several villages to the ground, Amon Amarth will also be bringing one of the best lineups of the year with them as they are joined for the full run by fellow genre legends Carcass, Obituary and Cattle Decapitation. These history making shows will see Amon Amarth become the first ever extreme metal band to headline arenas in North America. A truly exceptional feat for a European viking metal band who started touring the US in the early 2000′s, playing bars and clubs.

“Heathens! Come make a battle to remember with us on these monumental and historic raids along with our fellow brothers in metal Carcass, Obituary and Cattle Decapitation. Let’s make these the biggest death metal shows in history in this country! Bring your viking spirit and get ready to raise your horns and row like you’ve never rowed before! See you at the shows!“ 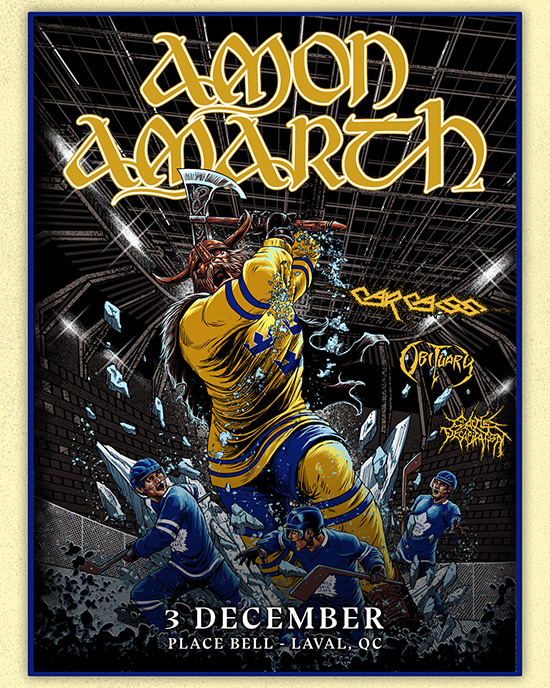 Full routing for The Great Heathen Tour, produced by Live Nation, can be found below. 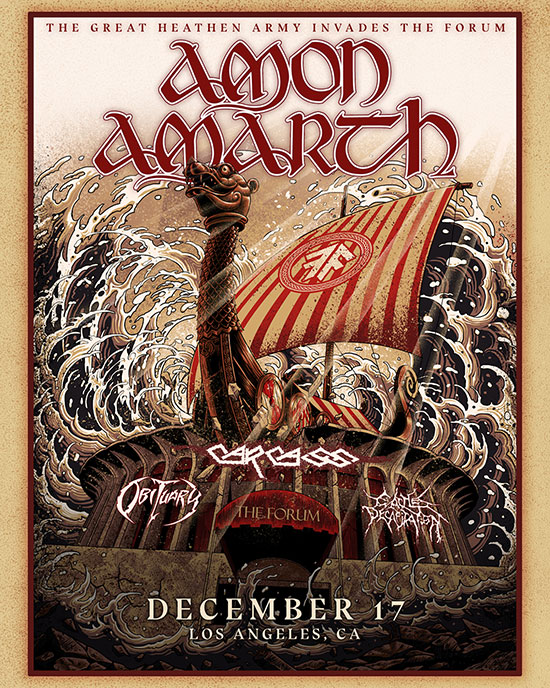 Armed with their 12th and arguably finest album to date, Amon Amarth have swung back into full action with a bloody, broadsword-wielding vengeance. The release of the new album ‘The Great Heathen Army‘ kick-started another relentless global campaign, commencing with a co-headlining tour of Europe alongside Machine Head and fellow countrymen The Halo Effect, before they set sail across the Atlantic with their sights firmly set on making history on North American shores. Still ruthlessly devoted to the ways of the warrior, Amon Amarth have Odin’s wind in their sails like never before.