Just ahead of their monumental 30-year anniversary worldwide stream extravaganza this Halloween, Behemoth offer another taste from 2020′s ground-breaking spectacle with the hauntingly beautiful “Bartzabel,” taken from their upcoming audio-visual album, In Absentia Dei, out on December 17th. View the video at: youtu.be/HJNW5C8IRoA

In Absentia Dei is the testimony to the band’s pioneering vision during the height of our world closure. The Polish masters of extreme metal took over an abandoned church in rural Poland to perform a worldwide display of black metal magick. Relive it now!

In Absentia Dei can be pre-ordered in the following formats at: metalblade.com/behemoth 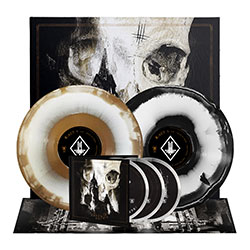 Frontman Nergal previously stated that “In Absentia Dei was a massive challenge and a huge risk, but it was a great artistic and commercial success. The response was absolutely brilliant – we made a statement with this performance and set the bar high. I hope that we can continue to raise the bar with the projects to come!“

In Absentia Dei will be available as digital album, digibook and 3xLP vinyl in various colors. All Metal Blade Records triple LPs come with a premium 20-page booklet.

The event was said to set a new standard for streaming events in the future and this was something BEHEMOTH set out to achieve from the start. Produced by Grupa 13, In Absentia Dei was presented as a show of four parts, woven with high-production theatrics and even hellish flames emanating from all parts of the sacred building.

BEHEMOTH released their latest full-length, I Loved You At Your Darkest, in 2018 to vast critical acclaim. I Loved You At Your Darkest marked a milestone in the history of the band, being not only their most successful album, but also an audiovisual masterpiece: from its detailed, blasphemous artwork, to the highly vicious, yet deeply emotional tracks, BEHEMOTH once again played with fire – and ignited a wildfire burning the narrow minded bigotry of Christianity down to the ground.

Allochiria – We Crave What We Lack / Live @ studio

Chief Of Smoke – A Fresh Round Of Smoke [EP]