Bay-area ragers VIO-LENCE kick your teeth in with “Let The World Burn,” the first official music video from their eponymous 5-song EP, due on Metal Blade Records on March 4th. “Let The World Burn” marks the third video in the bands catalog, following “World In A World” (off 1990′s Oppressing The Masses) and the 2020 single “California Uber Alles.” The video was directed by Robert Graves/Defiant Digital Productions.

Frontman Sean Killian states, “The memory of you will be forever forgotten when the extinction event arrives and fire becomes God. When the world burns and all is destroyed, all you know, all you believe will be forgotten forever. Let the world burn!“

Phil Demmel, founding guitarist, adds “I hadn’t written a lot of thrash in the past 17 years or so but being the main songwriter for the band over the years I wanted that sound, I wanted that mid-80s raw thing, but I also wanted to capture our signature notes and structures and stuff like that.“

VIO-LENCE will bring their head-stomping brutal live show to select cities with fellow thrashers CORONER before both legends impede upon the Maryland Deathfest on May 27th. Tickets on sale now. 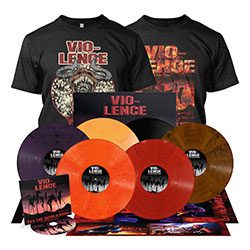